Regional rains will continue this afternoon 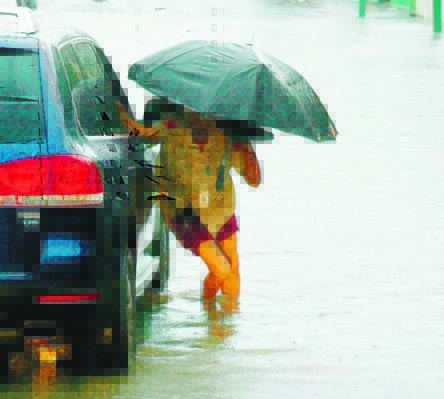 (File) .- A man tries to push a vehicle that could not cross a pool of water formed by the rains in the city. The downpours caused flooding of many streets in Santo Domino and the interior of the country. El Nacioanal / Justo Maracallo 06/12/07

Scattered showers and thunderstorms will be recorded over provinces in the Northeast, Southeast, Southwest, the Central mountain range, and the border in the afternoon. In the rest of the country, the rains will be scarce, according to forecasts by the National Meteorology Office (ONAMET).

The office anticipates that in the National District and the province of Santo Domingo there will be scattered clouds and scattered showers with isolated thunderstorms occurring in the afternoon.

Tropical Storm Epsilon was 1,180 kilometers southeast of Bermuda last night, with maximum sustained winds of 75 kilometers per hour, but due to its position and distance, it still does not pose a danger to the Dominican Republic.

Tomorrow, Wednesday, there will be an increase in humidity over the country and overcast with scattered showers and electrical storms will occur over provinces in the Northeast, Southeast, Southwest, Central mountain range, and border area.