Abinader: “It is time to invest in the Dominican Republic” 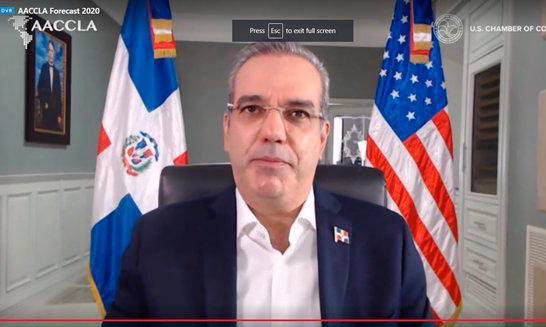 The president spoke during the framework of the “Forecast on the America and the Caribbean (Folac). (EXTERNAL SOURCE)

Abinader was in favor of the country, taking advantage of its privileged geographical location to promote the nearshore and take advantage of the tendency of North American companies that are relocating their supply chains to closer markets.

“This is the time to invest in the Dominican Republic and to create strategic alliances that will influence the creation of new business opportunities to strengthen the country’s competitiveness and to tighten relations with our main commercial partner,” he said.

The President spoke during the “Forecast on the America and the Caribbean (Folac),” organized by the Association of American Chambers of Commerce in Latin America (AACCLA), which took place during the 28th edition of Dominican Week in the United States.

During the conversation, the President highlighted the country’s benefits to attract foreign investment in infrastructure, facilities for the injection of capital, and free trade agreements of which the country is a signatory.

“The main objective of our government is to create some 300 thousand new jobs in the next few years, which we plan to achieve through the growth of companies by establishing public-private alliances and opening up to foreign investment,” he said.

The head of state said he would soon introduce a bill to Congress to establish the “Zero Bureaucracy” program, which collaborates with the American Chamber of Commerce of the Dominican Republic (AamchamDR) to eliminate government bureaucracy to streamline and make public administration more efficient.