Minister of Agriculture: We are lowering food prices 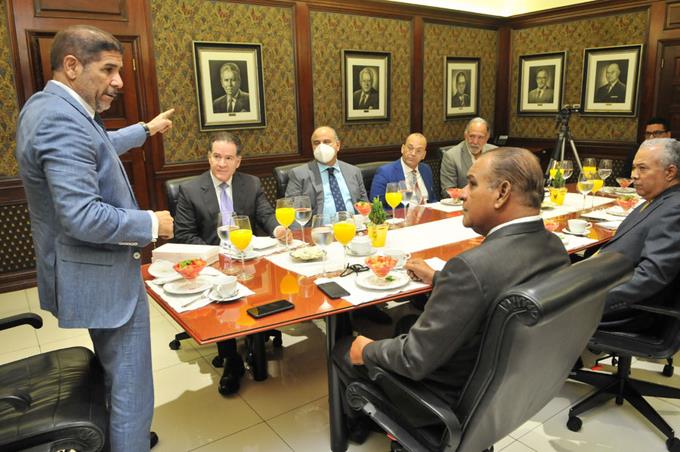 The Minister of Agriculture has a very clear focus for its management: to work hard and guarantee food security in the Dominican Republic because, as he believes, “people want to see facts and they will have them.”

“Agriculture is complex,” were the words that Limber Cruz used to communicate that the sector will gradually improve, during the Listín Breakfast, where the president of Editora Listín, Manuel Corripio Alonso, were also present; the vice president, Héctor José Rizek; the director of the Listín Diario, Miguel Franjul, and the deputy director, Fabio Cabral; as well as Freddy Fernández and Rafael Ortiz Quezada, from the Ministry of Agriculture.

Cruz is aware that some products have risen in price in the country, but the Listin Diario’s Breakfast served as a stage to acknowledge that agriculture has its cycles, and he has only been in power for two months. However, by 2021, the official hopes that through the effort made with the harvest, the cost to buy some food items will decrease.

How will Cruz accomplish this? His explanation is understandable. A banana cannot be harvested in less than 10 months, but other short-cycle products such as beans that last less than three months may be available in the market at lower prices from January.

The supply of medium-term agricultural products for harvest will be higher for March and April. Cruz guarantees that by May, the month where the long-term harvests will be ready, there will be more bananas availability.

The Minister of Agriculture’s philosophy is not to find culprits for the high price of agricultural products. Still, it is to create a work dynamic to reach farmers in the field with brigades and fertilizers with the aim that, for example, bananas be cheaper.

Once there is food security, Cruz points out, exports of products that have a lot of potential for the Dominican Republic will continue to be promoted, such as cocoa, coffee, tobacco, bananas, and sugar. In contrast, mangoes and avocados can be promoted as a Country Brand.

“The more we export, the better we Dominicans eat because one prepares for that,” reveals Cruz.

One of the complaints of the population in recent weeks is the price of bananas. In this regard, Cruz argues that the productivity of this item has been affected by the rains because this is a tropical product that needs a lot of sun, and in recent weeks there has been a lot of rain.

The importation of bananas has not been an option to eradicate the problem. Bringing it to the country is more expensive than what is produced here, and without commercializing, it can cost up to RD $ 38, but this price is not the main difficulty since the subsidy can be used. However, some diseases such as “Panama disease” (caused by a fungus) can enter the Dominican nation and destroy other products.

According to Cruz, there are foods, such as rice, controlled in both production and prices, still being offered at RD $ 23. He adds that around 1,600,000 jobs are being planted in the country.

“That is quiet. The country eats 13 million quintals of rice, and we produce 1,100,000 quintals every month, plus 400,000 that come from DR-Cafta, so that balances out, and that is why the price remains the same,” he indicates.

Cruz estimates that the Dominican Republic could export meats to the United States, such as cattle and chicken, with special cuts. Still, first, there must be a general certification in slaughterhouses in the country.

He adds that exports of this type, albeit small, have already been made to Cuba and Puerto Rico, trying to find new niches.

¨We are concerned about sensitive products because it is not the same that the cubanela pepper rises you to the chicken, rice, or the banana,¨ says Cruz.

He states that chicken meat was at RD $ 16 on the farm and rose to RD $ 22, and now comes the process of advancing production with the increase in demand and thanks to the opening of hotels.

Cruz was the spokesperson for the good news: permits have already begun to be given to export chicken meat.

The pork has been imported so that in December, there is enough quantity for the Christmas festivities.

The Minister regrets that there are two problems for livestock in the Dominican Republic: tuberculosis and the closure of exports.

The minister trusts planning because it “gives light,” and it was shown that producers have adapted to the coronavirus pandemic. However, he clarifies that production is not automatic, so there is a gap between consumption and sowing.

The official considers that agriculture has advanced despite Covid-19 because cleaning a country, both plant and animal, is a process, highlighting that some international organizations are supporting the nation in this regard.

“The coffee is still threatened. It has not been cleaned. The cocoa is much better,” he says.

When the coronavirus arrived unexpectedly, hotels closed and stopped buying from farmers. Those crops were lost. In this regard, Cruz understands that storage is quite limited in the country.

According to Cruz, as there was a slowdown due to the fall in tourism and restaurants’ closure, the producers reduced their productions and adapted to the demand. Still, after the activation of the economy, the supply is increasing.

He comments that President Luis Abinader chose the agricultural sector as one of the axes to relaunch the economy so that from the transition, the axes were established that would meet the objective of creating jobs, producing and guaranteeing food security.

“We first chose production because we have to produce, but do it well, but we also chose to finance because the producers had lost their crops since they could not place them on the market. There was a pocket problem. We started guiding because we have to use technology and fertilizers on time,” explains Cruz.

The minister’s idea is to sow the country, adding that there will be a lot of production in the short term, and for this, they have chosen areas that are potential for agriculture, such as San Juan, Barahona.