The inclusion of women in eel fishing 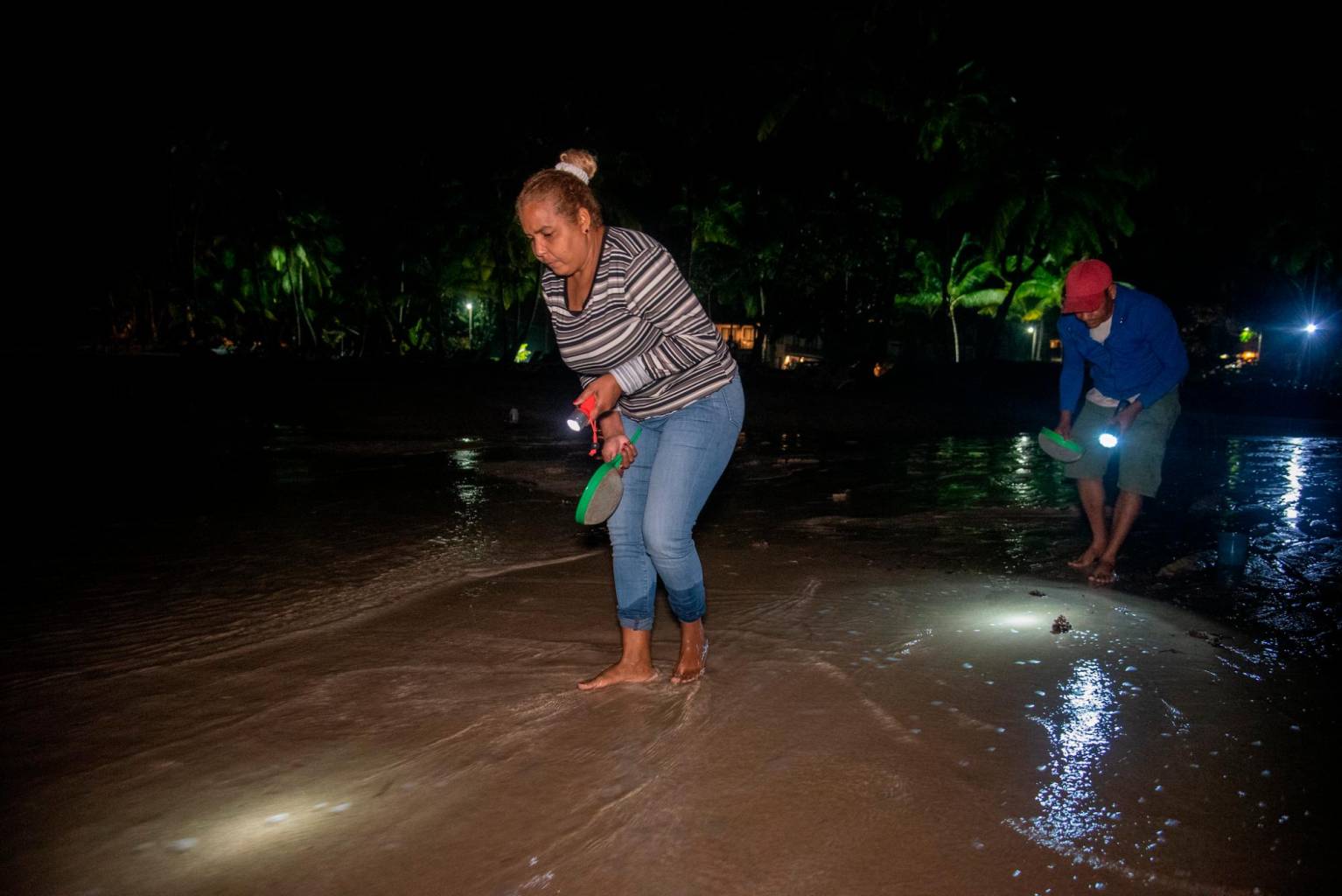 According to the first census of fishing in the DR in 2019, 9% of all fishermen are women

Sulay del Carmen is 41 years old and had never practiced fishing. It is 9:30 pm last Saturday at the mouth of the stream known as Caño Nuevo, in Portillo, Samaná, and he is preparing to fish eels. She is in the company of her husband, Guillermo Mejía Mercedes, 46 years old.

She is originally from Higüey, and he is from Las Terrenas. This is the first fishing season for her, as she has only been living in the area for three months. She has a flashlight in her left hand and her right a kitchen strainer, as does her husband. There are three more Angula fishermen, all of them belong to the Angula Las Terrenas, Portillo, La Barbacoa Fishermen’s Association (ASOPALPOBA), which has 69 fishermen registered and licensed by CODOPESCA. There are eight women in the association.

Genrry Jiménez from ASOPALPOBA shows his 2020-2021 eel fisherman’s license. With this card, you can fish in the accredited river and circulate during curfew hours. ( MARVIN DEL CID )

As an association, they have permission to exploit eel in three small rivers, Boca Nueva, La Calolima, and Lanclón, in which they have been fishing eel for three years. Sulay and Guillermo explain that they fish for eel to help them survive. He is a grocery seller, and she does not work for now but is looking for a steady job. Although this fishing is relatively easy for her, the downside is that it is done at night. “What if it is a bad night, sometimes you have to work until dawn. That’s not easy, but I think it’s worth it,” Sulay explained.

Guillermo explains that this year, as an association, they decided that women can participate and formed a group of women to generate their own income. “We include them because we believe that women also have the right to earn money as we do since this fishing is easier for one to earn a little money,” Guillermo stressed.

Both explain that in any job, they could earn 500 pesos for a full day of work, while fishing for eel, in two hours, they can make more than 2,000 pesos.

Guillermo rushes to capture an agula at the mouth of Caño Nuevo in El Portillo, Samaná. ( MARVIN DEL CID )

History repeats itself along the north coast of the country. In each river where eel is exploited, women are directly involved in the task. In the El Limón river in Samaná, Diario Libre spoke with a minor last January, who was fishing among dozens of people of different ages at 1 in the morning. “I came to fish because I want to wear braces, and my mom doesn’t have the money,” he explained with a smile. In Nagua, a community member explained to Diario Libre that many women who offer sexual services prefer to fish eel because of the more significant economic benefit that this activity leaves behind.

It is not known precisely how many women are engaging in this activity. However, in the first National Fisheries Census 2019, published by the National Statistics Office, CODOPESCA, and the Inter-American Development Bank, of 14,929 fishers nationwide, 1,343 are women, about 9% of the total fishermen.

As the eel fishery is not identified in the census, it is difficult to know precisely how many of these 1,343 women are eel fishermen in the period sampled. When the subject was consulted with the current director of CODOPESCA, Carlos José Then, he considers that, although the precise data is not available, he understands that most women engaged in fishing are eel. “I would say yes, that the vast majority are associated with the elver issue. In meetings with associations with women fishermen, they are few, but there are. I believe that the vast majority go into eel fishing,” said Then.

It’s one in the morning on Sunday, and in Caño Nuevo, only Sulay and Guillermo remain. They decide to leave since the waning moon appears on the horizon. They, like other fishers, know that the eel hides in the moonlight. They take a few grams, perhaps 5, which at the current market price is about 750 pesos, hoping that the dark night lengthens and the price improves in the coming days.