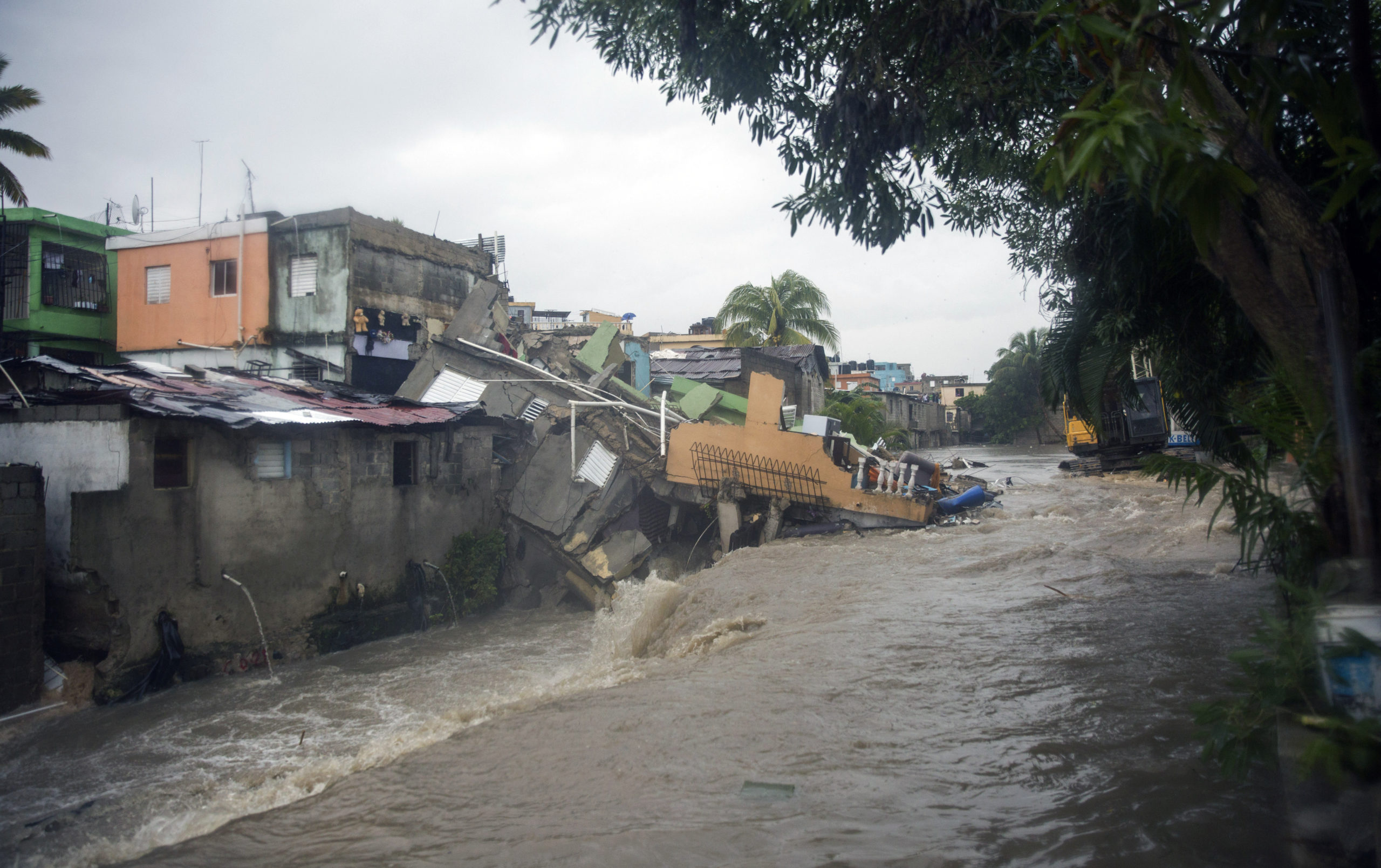 Water runs along the streets of Santo Domingo causing the collapse of houses on August 23, 2020 as Tropical Storm Laura batters the region. - Tropical Storm Laura hammered Hispaniola island with heavy rain killing at least three people in the Dominican Republic and five in Haiti, and was set to become a hurricane on Tuesday. (Photo by Erika SANTELICES / AFP)

Tomorrow the 2020 hurricane season ends, the most active in history, with 31 formations, more than 432 people dead, and losses of more than $40.256 million, according to reports from the National Hurricane Center (CNH) and civil protection agencies.

Among these cyclones, 13 reached the category of hurricanes, with winds over 118 kilometers per hour, six were major hurricanes, 17 tropical storms, and one depression, according to the CNH.

This season is only compared to that of 2005 when 30 hurricanes were formed, including 15 hurricanes, 12 tropical storms, and three depressions. Among these, only the Alpha storm on Oct. 23 produced rain in the Dominican Republic.

In the current season, among the countries that were affected by the hurricanes is the United States, impacted by 17 hurricanes somewhere in its territory, followed by Mexico, Bahamas, Dominican Republic, Haiti, Cuba, Belize, Honduras, Guatemala, Nicaragua, El Salvador, Bermuda, and Cape Verde, in Africa.

The hurricane that caused the most damage was Eta, which caused 189 deaths, with 6.5 billion dollars in losses during its path between October 31 and November 13 through Nicaragua, Honduras, Guatemala, El Salvador, Cuba, Mexico, and in the United States, Florida, and Georgia.

According to preliminary reports from civil protection organizations, another cyclone that caused significant damage was Iota, with 84 people killed, and Laura, with 77 deaths and 14 billion dollars in losses.

The most powerful hurricane of the season was Laura, which registered winds of 240 kilometers per hour during the season.

This year, the cyclones also reached Europe, affecting the Iberian Peninsula, from Spain and Portugal, when they were affected by Hurricane Alpha on September 18, according to the National Hurricane Center records.

The season begins on June 1st and ends on November 30th of each year. Before the beginning, tropical storms Arthur and Bertha were formed on May 16th and 27th, respectively.

Laura was one of the phenomena that affected the country, which began as a tropical wave on August 16th on Africa’s coast. On the 20th, it reached the category of depression. On the 21st, it approached the islands of Guadalupe and Dominica in the Lesser Antilles; on the 23rd, it made landfall in San Pedro de Macoris, Dominican Republic, with tropical storm winds being named Laura; on the 24th, it hit Haiti and part of the territory of Cuba and Bahamas, and on the 25th it entered the Gulf of Mexico as a hurricane. On the 27th, it impacted Cameron, Louisiana, Texas, and Arkansas, United States, with winds over 240 kilometers per hour, causing the death of 77 people, according to the CNH and civil protection organizations’ records.

Another cyclone that crossed over the territory of the Dominican Republic was Isaiah on July 30, causing moderate and strong rains in the eastern and northeastern regions. It had produced showers in Puerto Rico and some islands of the Lesser Antilles in the previous days.

In the Dominican Republic, these phenomena are monitored by the National Office of Meteorology (Onamet) through the Forecasting Center, where some 20 meteorologists provide services, under the coordination of Gloria Ceballos and Miguel Campusano, director and sub-director, respectively.