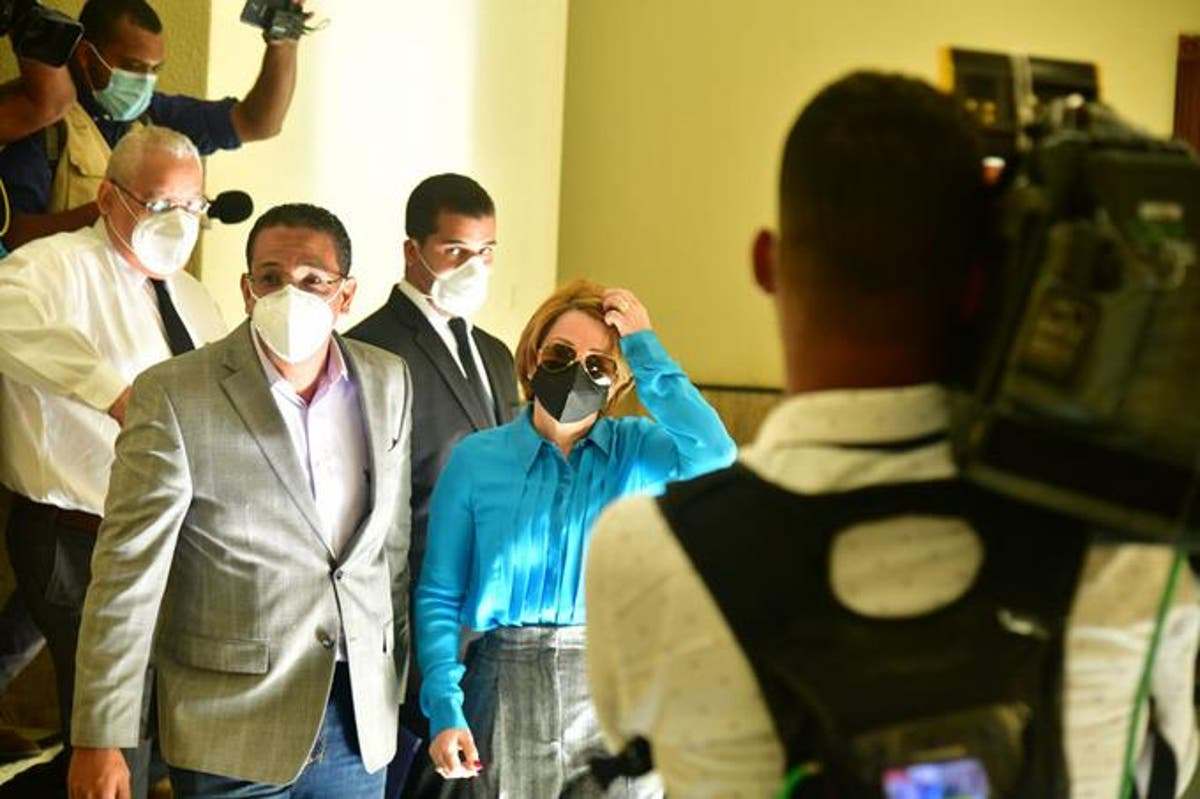 The former deputy Lucía Medina, during her visit yesterday to her brothers Carmen Magalys and Juan Alexis Medina Sánchez, at the Ciudad Nueva Palace of Justice. / JOSE ALBERTO MALDONADO

The detainees have had to wear a green shirt, the inmate’s uniform, to comply with the rules of the system of the new prison model.

The ten people arrested by the Public Prosecutor’s Office for alleged acts of corruption, front men and privileged suppliers of the State in the past government of Danilo Medina, have been sleeping for two nights in the preventive jail of the Palace of Justice in Ciudad Nueva, waiting for coercive measures to be known.

The request for coercive measures must be filed before the expiration of the 48-hour deadline set by the Constitution for a criminal defendant to be brought before the competent judicial authority, which ends in the early hours of Tuesday morning. If they fail to do so, the Magna Carta orders that they are released.

Former officials and relatives are only receiving visits from their lawyers, a measure that, according to reports, has been adopted to prevent contagion of Covid 19.

That was the reason yesterday that the former president of the Chamber of Deputies, Lucía Medina Sánchez, could not enter the jail to see her two brothers, Juan Alexis and Carmen Magalis.

Last Sunday, the ex-president expressed his anger for the abusive way his fellow party members, including his two brothers, were treated.

Lucía Medina arrived at the Ciudad Nueva Palace of Justice at 12:14 in the afternoon. As she could not enter the jail, she left after a few minutes, without giving any statements to the reporters.

Medina arrived at the Palace of Justice and quickly climbed the stairs, but then went down without a word. Attorneys for the defendants have been visiting their clients.

The detainees have had to wear a green t-shirt, the prison uniform, to comply with the new model system’s rules, to which that facility belongs since November 17.

“It is a rule that must be followed,” said attorney Luis Minier, the legal representative of the former president of the Patrimonial Fund for Reformed Companies (Fonper), Fernando Rosa, who had to go out and buy a poloché because his size is xl. Those that were available in jail were of no use to him.

Health of the detainees
Luis Minier, the lawyer for the former president of Fonper, Fernando Rosa, confirmed yesterday morning that the former official suffers from hypertension and thyroid. He had to be assisted by the prosecutor’s doctor. He argued that because of this health condition that he presents, he feels terrible, mainly because he has never been in prison.

Later, the secretary of legal affairs of the Dominican Liberation Party (PLD), José Dantés, said when leaving the jail of the Ciudad Nueva Palace of Justice that the former officials and relatives are well, in good spirits, but tired by the form and time of the raids early Sunday morning.

“They are well, in good spirits, and confident that their criminal responsibility is not compromised in this process,” he said.

He said he had spoken with five defendants, the brothers Juan Alexis and Carmen Magalis Medina Sánchez, Freddy Hidalgo, Fernando Rosa, and the former comptroller Rafael Germosén Andújar. He considered no need to do the raids at dawn to arrest them when they could be summoned to the Attorney General’s Office. He specified that the night and early morning hours are only allowed for exceptional raids.

He affirmed that there are cases that would only entail administrative sanction. What is attributed to him is a violation of the purchasing and contracting law, which does not involve imprisonment.

“I believe that this public ministry is independent, I think, what I am not one hundred percent sure is that they let it act independently, and that is what I want to see,” he asserted.

He said that he is concerned about the public prosecutor’s pressure so that the independence that he wants to proclaim is only of speech and words. While Dantés was offering statements, a prisoner who was being taken out of jail suffered a seizure of epilepsy and fell to the ground, so Dantés stopped talking and asked for a doctor to be present.

The arrests
They were arrested last Sunday morning in operation called “Operation Anti-Octopus” by investigators.

CORRUPTION
CASES
The evidence.
The public prosecutor pointed out that several of the ten former officials and front men arrested were destroying and hiding evidence, intimidating witnesses, and making financial movements to suppress unjustified financial statements.

The accusations
The group is accused by the public ministry of administrative corruption, of being front men and having been privileged providers of the State, taking advantage of family ties with the political power to accumulate fortunes during Danilo Medina’s past period government.