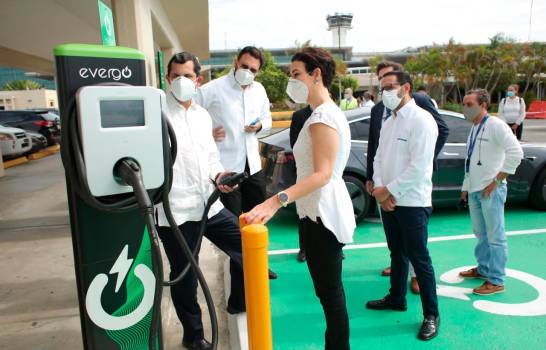 The initiative arises from an alliance between the Consorcio Aeropuertos Dominicanos Siglo XXI, AERODOM and the company InterEnergy Systems Dominicana

The José Francisco Peña Gómez terminal is the first airport to be equipped with electronic chargers for vehicles. A module was inaugurated yesterday to supply energy to drivers who need to recharge their cars.

The initiative arises from an alliance between the Consorcio Aeropuertos Dominicanos Siglo XXI, AERODOM, and the company InterEnergy Systems Dominicana and its technological platform Evergo, which installed five chargers for electric vehicles.

The five electric charging devices were placed in a module within the Las Americas International Airport’s short-term parking lot. Users only have to arrive and fill up a digital process and supply their cars.

The five new charging stations installed in the passenger terminal parking lot are compatible with all-electric vehicles on the market and comply with the strictest safety standards, allowing drivers of these vehicles to make extra-urban trips and facilitating their use in the tourism industry.

Upon the inauguration of this charging station, AERODOM General Director Monika Infante Henriquez said that the company is susceptible to sustainable mobility problems and reduced transportation’s environmental impact.

She emphasized that these innovative cargo stations that were inaugurated along with Evergo reinforce Aerodom’s environmental commitment. At the same time, she said she hopes that this will boost the adoption of this type of technology in the tourism industry”.

Since yesterday, the modern cargo park was at the public’s service. At the same time, Evergo executives gave some explanations for those who are obliged to use it can do so as quickly as possible.

The electric vehicle charging modules are located under Evergo’s platform, four of which are level two charging stations, and one level three-station, known as ‘superfast’ or ‘fast charger,’ which revolutionize the electric mobility market inside and outside the country by allowing a vehicle to be fully charged -depending on the model- in less than an hour.