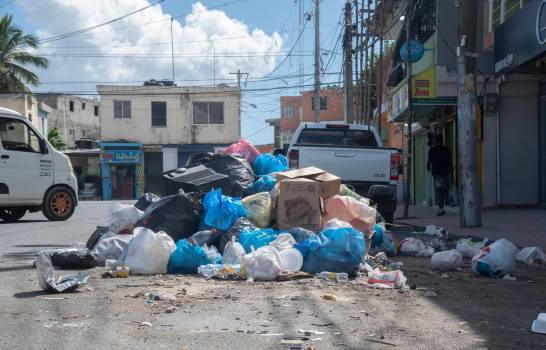 Santo Domingo.– In the National District and several municipalities of the Santo Domingo province, garbage abounds in streets and avenues in makeshift dumps, despite the efforts made by the authorities to keep each area free of solid waste.

On a tour carried out by Diario Libre, journalists recorded the garbage piled up on the Duarte Highway, Kilometro 17, Avenida República de Colombia, Cristo Rey, Guachupita, Gualey, Espaillat neighborhood and Villas Agrícolas, among other sectors of Greater Santo Domingo.

In some neighborhoods it was noted that the garbage had been recently collected and trucks were seen removing the waste.

In Santo Domingo Norte, the Hermanas Mirabal Avenue was clean, but Charles de Gaulle Avenue was not, even the sidewalks were littered with waste, forcing people to walk down the street.

According to Diario Libre, the garbage has not been collected in these places for several days, which causes discomfort among the neighbors due to the bad smells and the flies that emanate from them.

Similarly, improvised landfills were photographed in Santo Domingo Este in Los Trinitarios, Invivienda, Mendoza, Los Mina, Cancino and other sectors. In this district, Mayor Manuel Jiménez reported that more than 50 trucks were dedicated to cleaning the streets and avenues.

The amount of solid waste in Greater Santo Domingo increases every year during the Christmas season as people buy more items and food for the Christmas Eve, Christmas and New Year celebrations.

Some municipalities are increasing the number of garbage collection trucks, in order to deal with the situation and keep each area as clean as possible.