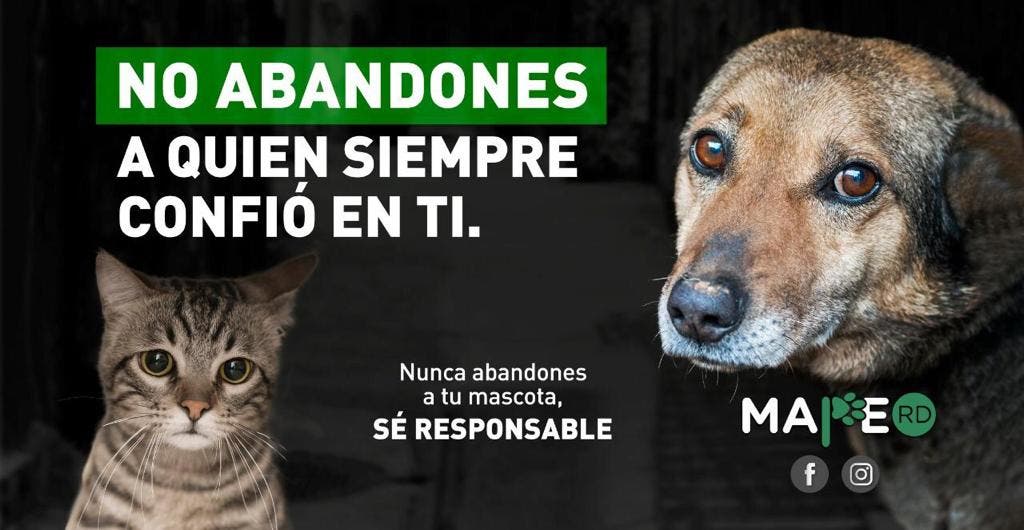 Don't abandon the one who always trusted you. Never abandon your pet Be responsible

Santo Domingo: “When you abandon a dog or a cat, you are causing it the worst suffering that can exist, and you make it start a tireless search. Don’t abandon your pets. Have a heart and be responsible,” this is one of the moving messages that Pets Lost and Found RD (Mape RD) spreads to promote responsible animal ownership.

This is part of their new campaign to educate and raise awareness with positive messages about animal protection in the Dominican Republic. Since 2012, the law seeks to eradicate abuse and ensure animals’ health and welfare.

Under the slogan “Don’t abandon the one who always trusted you. Never abandon your pet, be responsible”, Mape RD tries to attract the population’s attention to prevent irresponsible citizens from abandoning their pets because this causes them great suffering and adds to the tragic stray animal population.

The message is transmitted through billboards and messages broadcast on radio, television, and social networks.

So far, Mape RD has managed to place about 285 billboards in Santo Domingo, Punta Cana, Santiago, and San Pedro de Macoris. It plans to continue placing more, as this new campaign will last between six and eight months.

This new campaign has attracted the attention of officials, artists, politicians, and many citizens who value this initiative as very positive because of the impact that positive publicity has.

One of them is the Minister of Education, Roberto Fulcar, who said he is impressed by this message’s depth and educational nature.

“I congratulate its creator. Abandoning a creature that loves us gives way to our close ones to do the same. The example is a formidable lesson. I salute and support this foundation’s effective campaign because it has been developing the State’s role, although it will not continue alone… Do not abandon those who trust you,” wrote the minister.

Mape RD was born in 2017 to educate and create awareness among the population about the care and responsibility of having a pet. For its founder, who has preferred to remain anonymous, the solution to the animals’ situation in the Dominican Republic is to raise awareness through positive messages and sterilization.

So far, Mape RD has sterilized more than 800 dogs and cats and has made many other contributions because its founder’s criteria are that you always have to give back to the world some of what you earn.