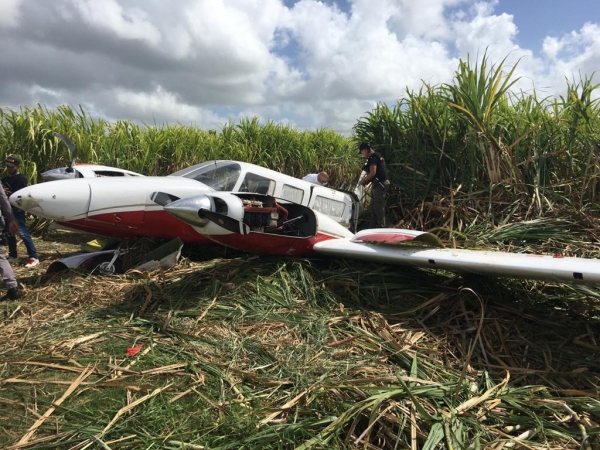 The first information indicates that the twin-engine aircraft Piper Seneca II, type 810C, of Brazilian registration, PT-EGU, took off from a non-established area of Venezuela.

The Dominican radars spotted the aircraft after ten o’clock at night and the Defense Directorate together with Air Force Operations gave the alert, activating all the protocols and proceeding to take off a Supertucan A29B aircraft that forced the occupants of the aircraft make an abrupt landing in a cane field in Batey la Romanita.

Immediately the tactical reaction units of the DNCD were mobilized and upon reaching the place they found several pieces of evidence inside the crashed aircraft, such as: flight routes, several GPS, two fuel jugs, a satellite phone and personal documents.

After continuing to follow up on the case, the authorities intercepted the drivers of a jeep moving suspiciously on the eastern highway, leading to a shooting, in whose skirmish, the unknown men managed to evade the pursuit.
“In the middle of the incident, the individuals left the Gran Cherokee jeep abandoned and it is unknown if one of them was injured”
At this time the DNCD is carrying out extensive operations, together with the Armed Forces and the National Police, to arrest and bring to justice the members of this criminal event.
As for the Gran Cherokee jeep, a cell phone and personal documents were found inside.
The authorities reported that they have very good information in relation to the case and as the investigative process progresses, other details will be offered.