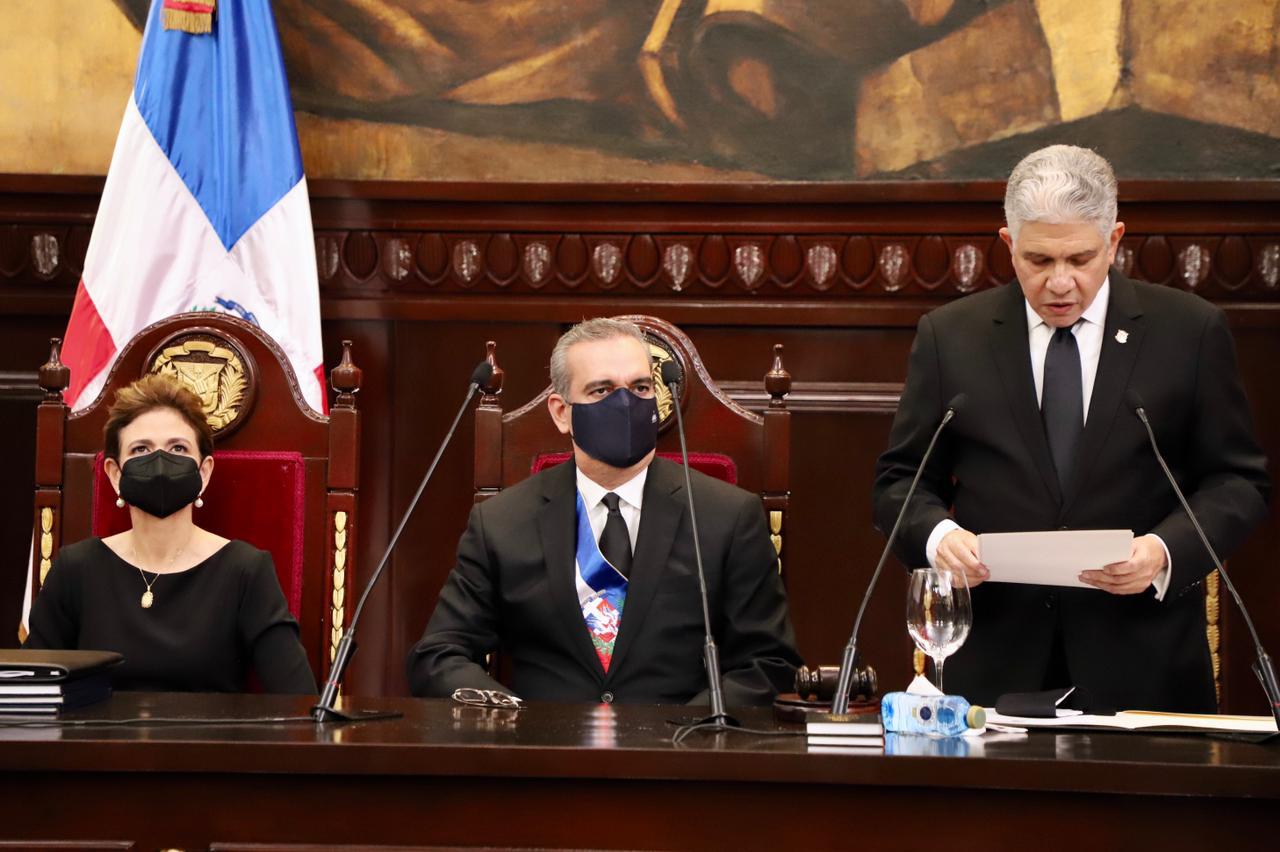 After receiving the military honors, the president entered the chamber to present his accountability to the Legislative Power and the country in general. JORGE CRUZ

Before the speech of Luis Abinader’s first accountability, the population was full of expectations, not only for what he would expose in it but also for the dismissal of the Minister of Public Health, Plutarco Arias, hours before the event and in the middle of the vaccination plan and the fight against Covid-19.

The head of state’s speech takes place in a different historical context; besides being the first other parties after 16 years with the Dominican Liberation Party (PLD) in power, this new government has been impacted by the incidences of the pandemic.

In addition to the above, the request for the return to classes and the clamor of the population due to the increase in fuel prices, reporting this weekend an increase of up to RD$9.50 (US ¢18 cents) for a gallon of gasoline.

Nevertheless, the National Congress dawned in complete tranquility, surrounded by police agents and fences, which maintained the security of the surroundings of the place for the arrival of the ministers, congress members, and other authorities who would attend the first accountability of President Luis Abinader.

Even though a perimeter of at least one block around was fenced and with dozens of police officers monitoring those entering the Congress, there were citizens with banners highlighting positive aspects of the current government in front of the building.

Before 9:00 am, the musical bands of military institutions were rehearsing their notes while military platoons marched towards the respective spaces where they would perform the military honors.

The 222 congressmen who make up the Upper and Lower Houses of Congress, as well as some 60 guests from the Diplomatic Corps accredited to the Dominican Government, among others, were expected to attend this accountability ceremony.

Absolute secrecy was seen on the part of the ministers approached at the entrance of the National Assembly. Some deflected the subject, while others continued ignoring the questions.
Few were those who offered opinions on situations affecting the country; the constant was: “This is not the news today” and “We are summoned for other reasons.”

While the parade of officials, ambassadors, business people, and other personalities continued at the main entrance, some tried to go unnoticed by going, behind the backs of the press, to a space destined for interviews of the transmission made by the Presidency of the Republic; but they failed.

Such were the cases of the Administrative Minister of the Presidency, José Ignacio Paliza, the Minister of Education, Roberto Fulcar, and Víctor (Ito) Bisonó, Minister of Industry and Commerce. The latter preferred not to speak in the face of the criticisms raised this Friday by increasing gasoline prices.

Vice President Raquel Peña was scheduled to arrive between 9:40, and 9:45 am but arrived at the Centro de los Héroes at 9:37 am. The President arrived 23 minutes later.

After receiving the military honors, the President entered the hemicycle to present to the Legislative Power and the country, in general, his rendering of accounts.

During approximately 1 hour and 45 minutes, he addressed the achievements since his inauguration on August 16 in education, infrastructure, health, economy, tourism, international relations, among others. He took the opportunity to mention future projects.
With jubilation and rejoicing, the President was seen off by citizens waiting for him outside the Congress.

Afterward, some people approached the few remaining authorities to ask for favors or help. Gentlemen were even observed arguing and pushing each other.

In the end, before going to the Primada de America Cathedral to listen to the customary Te Deum, on this occasion officiated by the Metropolitan Archbishop of Santo Domingo, Francisco Ozoria, he received military honors again.

Even though the traditional parade held on the Malecon was suspended due to the pandemic, Dominican Air Force aircraft took to the skies with flags. At the same time, representatives of each institution presented their weapons.
A few drops of rain sprinkled those present, but that was not an obstacle for the press to gather the impressions of officials and business people on what the head of state said.

After that, the President laid a wreath before the Altar of the Homeland.