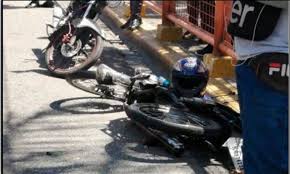 A collision between two motorcycles and a vehicle which is part of the security escort of the vice-president of the Republic, Raquel Peña, left one dead and one injured in an incident that occurred at the intersection of 27 de Febrero and Winston Churchill avenues.

Digesett agents working in the area told Diario Libre that the motorcyclists entered the intersection when they were asked to stop to give way to the vice-presidential escort.

The deceased was identified as Aneudy Manuel Castillo García, while the injured is Merkeseder Feliz Cuevas.

After a traffic officer gave way to the vehicles escorting the vice-president, the incident occurred, driving from west to east, and crashed both motorcycles.

According to Diario Libre’s information, the vice-president was returning from an activity carried out at the Ministry of Defense headquarters in the Armed Forces after participating in the act of recognition of outstanding military women.