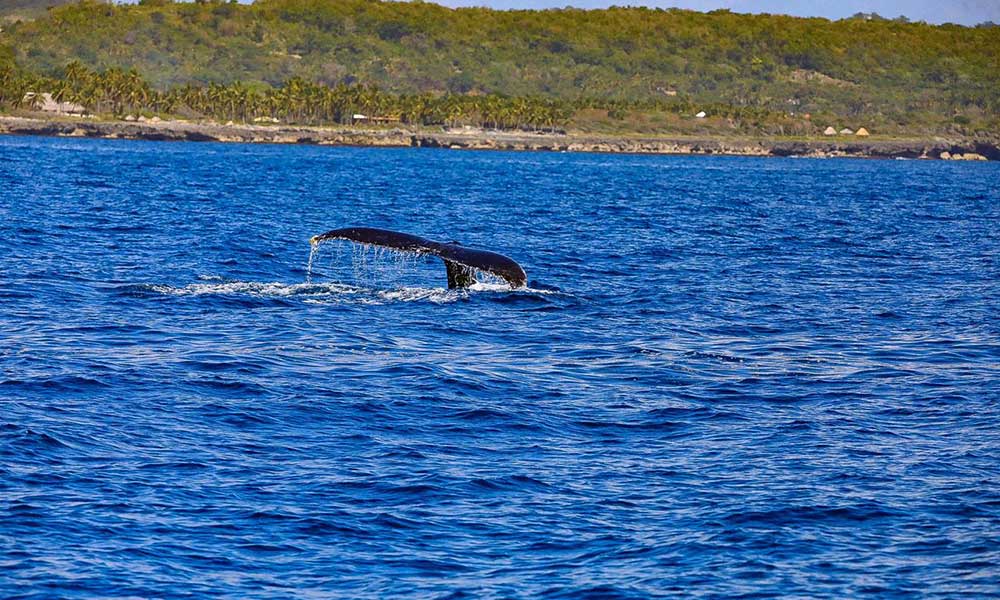 The whales stay until March 30 in the waters of Samaná. Karina Jimenez

This season, some 3,000 whales arrived in the warm Caribbean waters of Samaná.

Every year, humpback whales visit the Dominican Republic’s warm waters in search of a comfortable and safe place to mate and give birth to their calves. They start arriving in Samaná Bay and Banco de la Plata, in Puerto Plata from January 15 and stay until March 30. This boosts the economy and tourism in the area since people come from all over the country and abroad to enjoy the spectacle of these marine mammals.

Aurelio Reyes, a member of the Center for the Conservation and Ecodevelopment of Samaná Bay and its Environs (CEBSE), said that some 3,000 whales arrived in the warm Caribbean waters. The Ministry of Environment organized a tour for journalists, who observed how organized whale watching visits. Inspectors accompany the boats to the sanctuary.

If visitors are lucky, they will see the whales, the calf, and the escort. Although it may seem strange, the escort that accompanies the whale is not exactly the calf’s father because the escort male has nothing to do with its breeding but with its protection. According to studies, he does it to prepare the ground and/or gain points for the next mating.

The female whales stay the longest in Dominican waters because they have to give birth, feed, and raise the baby until they are strong enough for the return trip. The whales do not feed during their stay, although they do nurse their calves, which consume up to 50 gallons of milk per day, equivalent to 800 bottles. With this extremely rich milk, the baby gains 50 kilos daily.
It is estimated that whales can live up to 70 years of age.

Where do humpback whales come from?

These mammals travel up to 6,000 kilometers, from all over the cold North Atlantic, i.e., the United States, Canada, Iceland, Greenland, and Norway. Their population is about 15,000 individuals, 85% of which stay in Dominican waters. “The Dominican Republic is the most important breeding area in the North Atlantic, which is one of the largest whale populations globally,” explained Reyes, who called for their protection to conserve the species, and they are also an economic engine for Samaná.

The Minister of the Environment, Orlando Jorge Mera, said that the country is proud to say that humpback whales also belong to the Dominican Republic.

When visiting the humpback whale area, hikers should be very attentive to their waterspouts (the moment when the whale comes out to breathe). Although it is condensed air because these animals are warm-blooded, people perceive it as a jet of water; when the blow occurs, boats should go at a moderate speed because there may be more of them on the way. The idea is to avoid a collision with the animals.

The Banco de la Plata y la Navidad is a sanctuary for protecting mammalian animals in the Atlantic Ocean. The decree created it No. 319 of October 14, 1986, and modified by Law No. 202 of Protected Areas. It has an area of 600 miles to 19,438 square miles.

How to identify them?

The guides, the protectors, and even the captains of the boats know how to identify each of the whales that come to these protected areas, but how do they do it? Reyes explains that each humpback whale has unique black and white spots on its tail, which are not repeated from one whale to another; it is like a kind of fingerprint. “Each whale has an identity in its tail, each tail is different, and thanks to that differentiation, we can keep records of identity,” says Reyes.

The wounds on its back, which heal in white and do not fade, are also sources of individual identification.

In the Marine Mammal Sanctuary of the Dominican Republic, whose limits include the areas corresponding to the Pañuelo Bank and its surrounding area, Rincon Bay and the surroundings of Cayo Levantado, as well as the area used for humpback whale watching, there is a record of 12 species of marine mammals, such as manatees, dolphins, sperm whales, and pilot whales, among others.

To get to the sanctuary, visitors must board a boat at the Samaná Public Dock, located on the city’s Malecón, and take a boat, which costs 250 pesos per person.

So far this year, 21,000 Dominicans have lived the experience of seeing the spectacle of the humpback whales, which surpasses last year’s visits, which were limited due to the arrival of the coronavirus pandemic.