Dodging holes and garbage, this is how SDE’s municipalities “advance” through its streets

“The city that moves forward,” “clean city,” or “fair and creative city,” are the slogans that from signs of all sizes invade the eyes of those who transit on foot or wheels through the populous municipality of Santo Domingo East (SDE).

However, the illusion fed with encouraging messages and the district’s evident commercial development is interrupted when the rider suddenly bounces inside his vehicle or public transport after falling into one of the many holes that can be seen and, ultimately, felt by drivers and users on the different roads.

After a tour made this Saturday by a team of Listín Diario through various sectors of SDE, it was recurrent to come across “acostao’ policemen” (speed bumps) in the streets of any community, but it was the deep holes in the roads which really made the drivers step on the brakes or go through the potholes with the needle of their speedometers marking the minimum.

Orlando Martínez, an employee of a mechanical workshop in the Los Mina sector, used his leisure time to go out in front of the premises and make fun of the motorists who, due to the speed with which they were moving, could not avoid the hole located next to the interception of Juan Pablo Duarte street and Francisco Segura Sandoval street.

“It gets tense going through here,” Martinez said with a laugh.

The mechanic explained that the hole has been there for “a long time” and is getting bigger and bigger.

A chance to pass

The zigzagging that drivers must implement to get around the hole, which exceeds in size and depth the others in the referred road, congests the vehicular flow, thus turning the area into a scene of frequent discussion and hysteria.

Drivers must stick their hand out of the window of the vehicle to ask the other driver, who is approaching in the opposite direction, for a “chance” to pass because the parking on both sides of the road and the obstacles in between prevent traffic in both directions, even though the road is a two-way street.

The length of time it takes to travel along Carretera Mella, which crosses SDE almost from one end to the other, is not only increased by its length but also by the countless small potholes that “nobody wants to step in.”

According to the municipal officials consulted, the significant holes that persist on the busy road were ignored in the asphalting interventions carried out by the city authorities of past administrations on the Mella.

Santos Pinales, who has lived in the Brisas sector for more than six years, explained that when they fixed the road, they left holes that were “right there” just because they did not belong to the Mella Highway.

“When they were working, they only covered the part of the hole on the corner that went out to the avenue and the other part that was left here (referring to Guayubin Oviedo Street) they left unrepaired,” he protested.

Pinales also said that since the vehicles “fall very hard in the hole,” they have had to fill it with whatever materials they had on hand whenever they could.

As well as in the Mella Highway and the streets of Los Mina, others who travel with special care are the residents of Mandinga.

But despite the various incidents related to the poor condition of its roads and those that locals have witnessed, the peculiarity of Mandinga lies in the invisibility of garbage piles to garbage collection truck teams.

This scenario was observed this Saturday when the collection truck passed by the front of the Mandinga Park, located in the Camino de Mandinga extension, where the garbage bags rested leaning on a tree on which a sign hung that said: “No garbage, ok.” 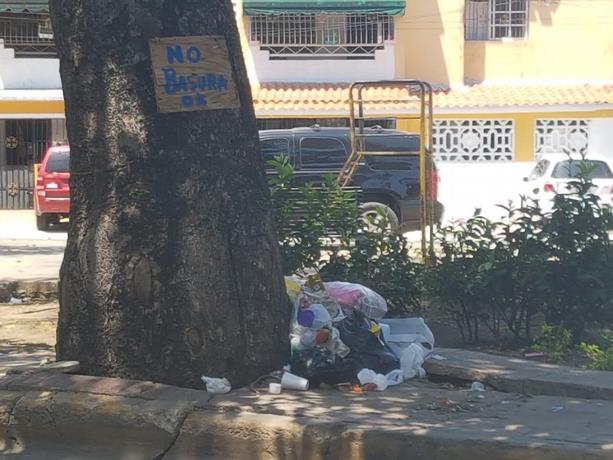