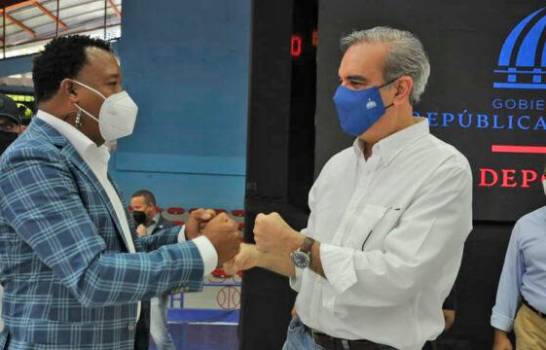 Pedro Martínez, Sports Advisor to the Executive Branch, considered as “very wise” the decision of President Luis Abinader Corona, (right), to worry about the small leagues of baseball growing within a regulated framework. (External source)

Seeking to regulate and benefit children who play baseball

Martínez and Guerrero decided to create conditions to regulate the training of young aspiring professional ballplayers to be a wise decision and applauded the facilities provided by the commissioner’s office.

They recalled that Veras, who played Major League Baseball with the Miami Marlins, San Diego Padres, and Atlanta Braves, was part of several baseball leagues in the National District, so he knows how they are managed efforts should be focused to improve the development of these institutions.

“Baseball, being the king sport of our country, requires special attention, and we are willing to be part of the innovations to improve its structure and the training of our future players, those children who embrace it with passion and desire to shine in the Major Leagues and represent with honor the colors of our flag,” said both former players.

“We are willing to collaborate, to be part of that project, because our baseball must be managed in an integral way from its beginning, to continue being a reference, not only for the quality of our players but also in organization, structure, and seriousness in the presentation of their documentation,” Pedro Martinez and Vladimir Guerrero.

Martínez and Guerrero appreciated the fact that one of Veras’ first actions was to seek support from the National Federation of Professional Ballplayers (Fenapepro), “which is an indicator that his management as Commissioner is aimed at improving the organization, with better credibility options when today’s children are prospects, sought after by Major League organizations.”

They also gave credit to the facilities in health, managed through the National Health Service (SeNaSa), where children, their parents, coaches, umpires, and scorers, will have free medical care.

Veras was recently appointed as Commissioner of Little League Baseball by the Executive Branch. The former baseball player has indicated his intention to seek the necessary elements to improve the structure of baseball. To this end, he has proposed plans ranging from educational training to organizing workshops with Fenapepro on the fundamentals and discipline of the game.

Martínez and Guerrero called on retired players and those active in Major League teams to join the project to germinate in all the provinces of the country.

In that order, they suggested the formation of provincial commissions, where the native baseball players of those places will be included, together with the sports and educational sector officials and presidents of associations, clubs and leagues, and owners of programs.

“We are willing to collaborate, to be part of that project, because our baseball must be managed in an integrated manner from its inception, to continue to be a reference, not only for the quality of our players but also in organization, structure, and seriousness in the presentation of their documentation,” stated Martinez and Guerrero.

“The fact that President Luis Abinader considered the person of Veras for the designation is an indicator that the Executive Branch is interested in baseball continuing as a world reference, the first foreign country with more players in the Major Leagues of the United States,” said both immortals.