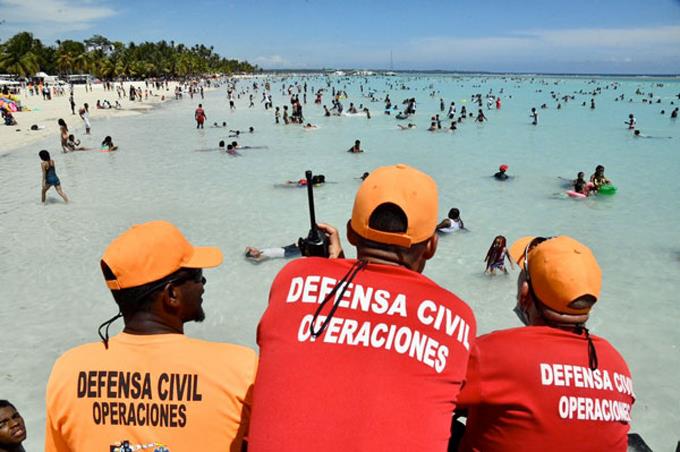 Santo Domingo, DR
Ash Wednesday, which is celebrated with a mass alluding to the religiosity of Holy Week, already anticipated what was going to happen at the end of Easter Sunday, when the lines of vehicles jammed the highways until very late yesterday.

“Fiesta and tomorrow, rooster.” With this expression began the extension of the parties and the beaches and resorts of all the regions of the Dominican Republic, some staying in hotels where the pandemic protocols were complied with and others at their own free will without exhausting the hygienic rules of physical distancing, without masks and ignoring the call of the authorities not to abuse the consumption of alcohol.

According to reports from the correspondents of this media and people on social networks, including YouTube, Facebook, Instagram, and Tk-Tok, hundreds of people showed off the parties and swimming.

There were even musical presentations. On the beach of Las Terrenas, located in the tourist area of Samaná, with the urban artists; El Alfa, Yomel el Meloso, la Perversa, and the American rapper CJ, according to a report of this media sourced through the social networks.

Reports indicate that in the different videos circulating in the social networks, the interpreter of “Coronao” can be seen driving a scooter and being guarded by members of the National Police while around him, a large number of people can be seen violating all the measures imposed by the authorities to control the spread of Covid-19.

In another video, the urban artists can be seen driving a car and enjoying the hundreds of fans that crowded around them. Likewise, El Alfa and all the other artists who accompanied him stayed in a villa in Las Terrenas.

Several citizens complained through their social network accounts that yesterday morning, Easter Sunday, the area around the beaches of Las Terrenas was full of garbage left by these people.

In Monte Cristi, as a contrast to the few people who went to bathing resorts in Santiago and other communities of the Cibao, the beaches Buen Hombre, on the coast of Villa Vásquez, Mi Popa, Juan de Bolsoño, and El Morro, were full of bathers.

Journalists of Listin Diario observed many people bathing on the Northwest beaches, without masks and drinking alcoholic beverages.

The Najayo and Palenque beaches looked like a human anthill, especially children, the most significant number of people who came to enjoy themselves during Holy Saturday. But not everyone who visited these beaches was able to take a dip because they were afraid of catching the virus.

Disobedience
During Holy Week on the beach of Boca Chica, the most famous of those near the city of Santo Domingo, many people took advantage of the holiday and the authorized bathing areas, some 408 authorized by the Civil Defense, to have fun.

However, few respected the prevention and distancing measures.

Beer cans, masks on the sand, and people crowded together, among other containers, were observed during a tour of Guayacanes and Boca Chica beaches in Santo Domingo and San Pedro de Macorís.

Alcohol consumption was not in short supply, as some had their drinks even in plastic bottles, while others could be seen with their beer glasses in hand.

This even though the director of the Alcoholic Beverages Control Program (Coba), José Payano, explained that during these three holy days, the consumption of alcoholic beverages would be prohibited in public and private places and establishments for public use, such as parks, beaches, restaurants, grocery stores, and bars. In Las Marías, in Neyba, four legal firearms and seven hookahs were seized; they also temporarily close the bar located around the beach to sell alcoholic beverages.

In Puerto Plata, authorities were forced to place a red flag in the beach area as a preventive measure. In Pedernales, it was reported that a group of partying people attacked a police patrol assigned to enforce the curfew with stones and bottles. Barahona reported an accident in Salinas, a municipality where three people were killed while partying and drinking alcohol.

Traffic jams
The access roads to the Capital city, mainly vacationers, arriving from the far South and the East and North suffered traffic jams.