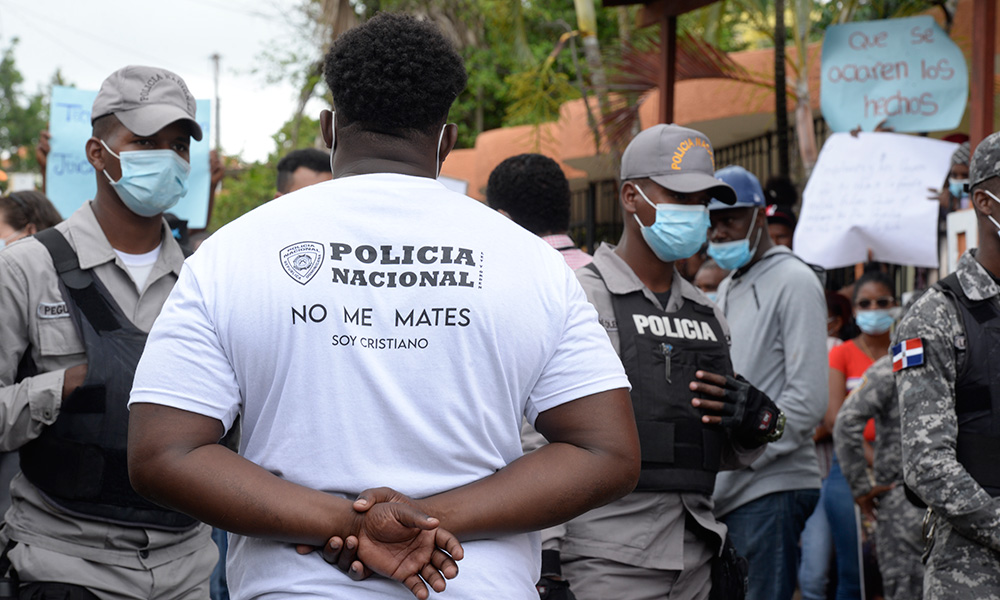 Both the relatives of the married couple shot last week in Villa Altagracia, as well as the relatives of the former policemen accused of committing the crime, demanded yesterday that justice be done in the case, and both parties were outside the Palace of Justice where the six accused were scheduled to be heard. They were divided by a line formed by police officers so that they would not mix.

The relatives of Eliza Muñoz and Joel Díaz affirmed that the authorities should deepen the investigations, because, they said, more people are missing in the case and specifically pointed out that the dismissed colonel César Martínez Lora, who is known as “Mariñe,” should be brought to justice. The colonel was the departmental commander of Villa Altagracia and, in the past, has been pointed out as a dealer of the drugs he seized.

“Let him also pay. I am going to fight until that delinquent Mariñe pays and all those involved… That no one comes to me here to say that pasola, Colonel Mariñe, that one personally I want them to take his clothes off in the street, that is what he deserves, they should send him to Najayo,” expressed Maritza Marte, mother of Eliza.

“Mariñe murderer!” shouted the relatives and friends of the Christian couple, who, according to the Prosecutor’s Office, were shot by the ex-police agents with an M16 rifle and a submachine gun. “They have to continue investigating more, whoever falls, the boss who gave the order… they still have not said who gave the order to shoot,” said Jazmín Reyes, Joel’s aunt, who together with the others wore T-shirts with the slogan “Police do not kill me, I am a Christian.”

On this matter, the head prosecutor of Villa Altagracia, Fatima Sanchez, indicated that they do not rule out that there are more people involved in the death of the couple, that they are carrying out the necessary investigations, but that they cannot give more details so as not to hinder the investigations.

“We are here demanding a fair trial, not a trial based on politics or social pressure. In social networks, we only see bad things about police officers. Nobody has released a video where they are seen doing something good… that the facts be clarified and that an exhaustive investigation is carried out so that everyone, on both sides, are satisfied with this process,” expressed Ana María Reyes, a family member of one of the accused, who also said that the people want to know what happened. She defended the work of the police and the dismissed colonel. “When Colonel Mariñe Lora arrived in this town, crime was reduced,” she said.

Yesterday, the chief prosecutor of Villa Altagracia, Fatima Sanchez, also said that the Public Ministry has enough evidence linking the accused to the death of Joel and Eliza. They are requesting the imposition of one year of preventive imprisonment as a measure of coercion.

“The Public Prosecutor’s Office has a large amount of evidence that compromises the criminal responsibility of the accused,” Sanchez explained. Defense of the accused challenges the judge who would hear the coercive measure.

The hearing of the measure of coercion of the six accused could not be heard because the defense of the former prisoner Antony Castro Perez challenged the judge Sugeldi Rosario Mena of the Office of Permanent Attention of Villa Altagracia. Lawyer Yeury Castro said that the magistrate was hostile and wanted to hear quickly, so they challenged her to put another magistrate in her place. The hearing is suspended without a date until the Court of Appeal of San Cristobal hears the recusal and decides if judge Rosario Mena will continue to listen to the case or be replaced.

According to the Public Prosecutor’s Office, the police officers had placed a checkpoint on the Duarte highway. Upon noticing the presence of the car where Joel and Eliza were traveling, they surprised them with a burst of shots of different calibers and in different directions without allowing them to stop: much less make visual contact with the occupants of the vehicle. He said that they used high-caliber weapons such as M16 rifles and submachine guns.