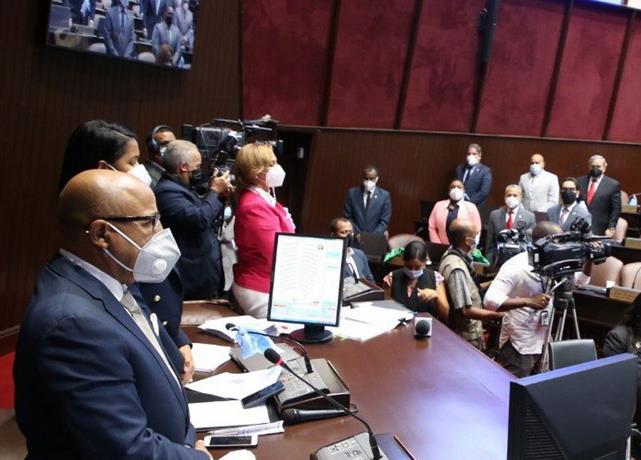 President Luis Abinader asked Congress for another 45-day extension due to the pandemic that has affected the country since March last year.

President Luis Abinader asked Congress for another 45-day extension due to the pandemic that has been affecting the country since March of last year.

In a work session marked by a dispute between the Chamber of Deputies and legislator Pedro Botello, president, the legislative body approved the extension for 45 more days of the state of emergency yesterday.

Although before the beginning of the session, some deputies commented on the possibility that this new request would not be approved, a moment later, the spokesman of the Dominican Liberation Party (PLD), Gustavo Sánchez, said that for “coherence,” his party would support a new state of emergency.

Tempers were high during the entire session. As soon as the meeting began, Deputy Pedro Botello requested to modify the plan to introduce the bill, which seeks to release 30 percent of the pension funds to the workers.

This request, although accepted by the President of the Chamber of Deputies, Alfredo Pacheco, generated discomfort in him, which lasted throughout the session.

Pacheco’s attitude changed. He began to make ironic and indirect comments after Botello insisted on knowing in this Wednesday’s session the legislative initiative that seeks to give the workers a percentage of their pension funds to face the effects produced by the Covid-19 pandemic.

Tensions
“I requested to you, under the understanding that you were reasonably going to give that understanding to the coordinating committee, but I submit it. I remind you that to modify the plan, you need two-thirds to be approved. We are going to submit to vote the request of Representative Botello, who undoubtedly wants to expose his colleagues to difficult situations, but let’s go upstairs,” was Pacheco’s initial comment that later triggered a confrontation between the two where both deputies hurled insults and even threats at each other.

Precisely in the middle of this chaos of offenses, threats of fights, and legislators trying to calm their two colleagues, Pacheco submitted the vote to approve the request for the new state of emergency. Simultaneously, the discussion with Botello continued and was approved almost without those present paying attention.

CHRONOLOGY
April 2021
The Senate must now hear the request, and if approved, the new state of emergency will begin on the 16th of this month.

March 2020
Since March last year, the state of emergency has been accompanied by a curfew.