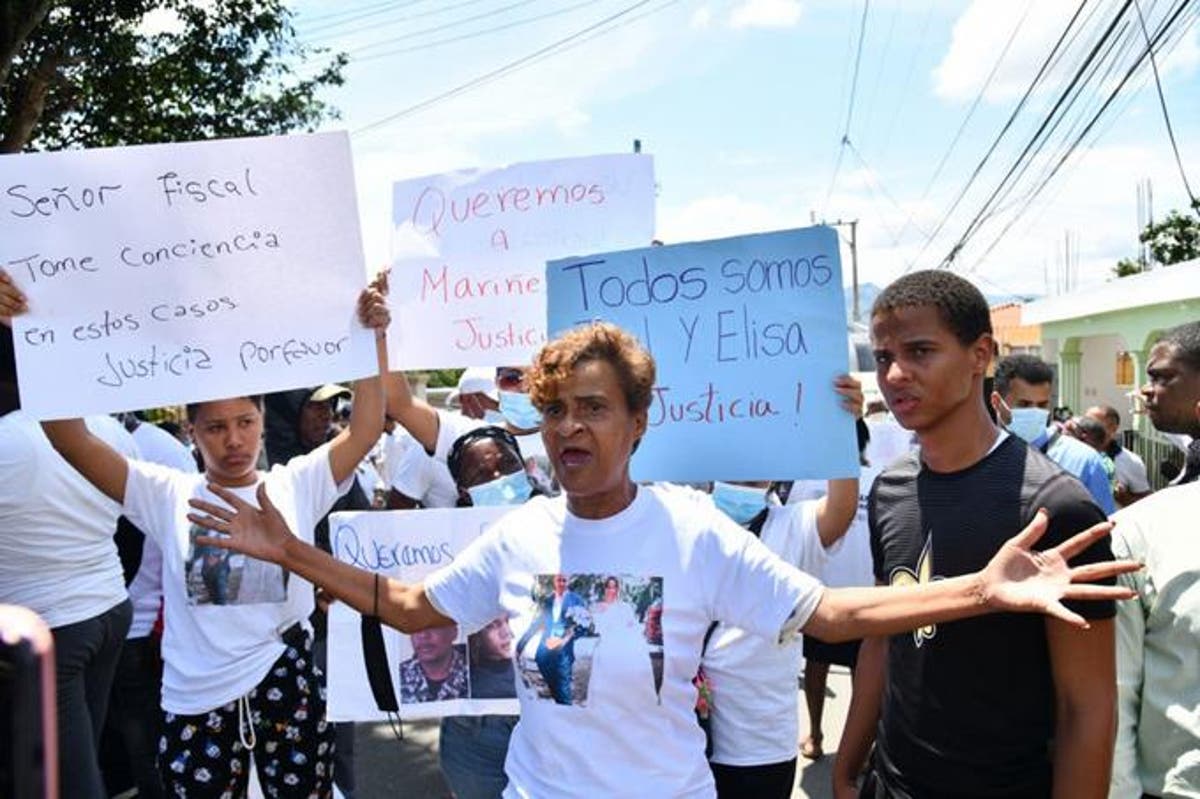 Relatives and friends of the victims insist on their request for justice for the murder of the innocent Christian couple on Tuesday, March 30. / ADRIANO ROSARIO

Yesterday the Permanent Attention Court of Villa Altagracia issued one year of preventive detention as a measure of coercion against the police agents responsible for causing the death of Joel Diaz and Elisa Muñoz.

After approximately four hours of hearing and two attempts of rulings between this and last week, Judge Sugeldi Rosario Mena emphasized that the evidence presented by the Public Prosecutor’s Office is robust and compromises the responsibility of the six uniformed officers for the shooting of the innocent Christian couple.

Likewise, the case was declared complex and they were sent to the El Pinalito Correction and Rehabilitation Center of La Vega, the privates Anthony Castro Pérez and Juan Samuel Ogando Solís, the corporal Ángel de los Santos and the sergeant Domingo Perdomo Reyes.

The lawyer of the former prisoner, Castro Perez, said that the judge’s decision should not have been the same for all the accused since they do not share the same level of responsibility in the process.

“We regret that the public, the media pressure, and the morbidity generate the need to issue a decision of the same sentences to all the accused when all of them do not have the same level of involvement in the process,” said Yery Castro, lawyer of one of the accused.

He assured that due to these policemen’s masks and caps, it had not been determined that they were even present at the place where the couple was murdered.

He also maintained that Anthony Castro did not have his gun loaded at the time of the shooting.

After the hearing, Fatima Sanchez, chief prosecutor of Villa Altagracia, affirmed that the investigation of the case has just begun and that she does not rule out other suspects. The prosecutor declared that justice would be done.

“Justice for Joel, justice for Elisa, justice for all” was the slogan that prevailed from the early hours of yesterday, where ladies, men, and young people belonging to the church where Elisa and Joel congregated, gathered outside the Palace of Justice of Villa Altagracia, where they sang Christian songs holding hands in a round, while anxiously awaiting a just decision.

Others insisted that Colonel Cesar Mariñez, who commanded the police patrol, should also be prosecuted.

Later came the police defenders, who asked the authorities “not to let themselves be pressured” by the demands for their conviction, and who claimed that the uniformed officers are innocent.

After the long wait of a week and three days, the victims’ lawyers said that the family is calm with the decision adopted by the court.

Meanwhile, the relatives of the agents sent to the La Vega jail, with tears on their faces, did not give the press statements.

On their side, the relatives of Lieutenant Victorino Reyes Navarro and Corporal Norquis Rodriguez applauded the decision of the court to send these two to Special Operations, considering that they will be safer there.