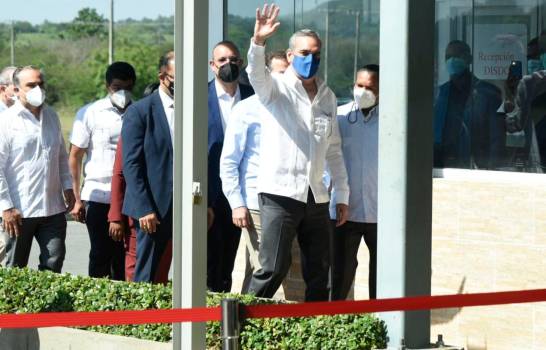 President Luis Abinader said on Monday that he hopes to bring from 1,200 to 30,000 jobs generated by the Santo Domingo Oeste Industrial District (DISDO) located in Hato Nuevo, Manoguayabo.

After holding a meeting with park business people and taking a tour of an industry of toilet paper, napkins, and other paper-based items that operate there, the president announced.

He said that this goal could be achieved in several years since DISDO has faced various problems since it began to be installed in 2004, which has caused that since then only 12 plants are in operation in the complex.

“Since 2004, when they began to be installed, the situation is that only about 12 plants have been installed that create 1,200 jobs, but this park can take up to more than 30,000 jobs. Therefore, we came here to talk with the industrialists to see how We can now increase and reach that amount in a few years, with the help of the Government and with the collaboration also of the industrial sector,” said the President of the Republic.

He explained that other reasons that have limited the growth of the Disdo are that some of the companies still do not have their titles, since they are still in Congress and the lack of security has caused withdrawals from the industries, a situation that he says is being corrected.

Abinader was accompanied by the Minister of Industry, Commerce and MSMEs, Víctor Bisonó, the director of Pro Industria, Ulises Rodríguez, and the director of the Santo Domingo Aqueduct and Sewer Corporation, Felipe Suberví.