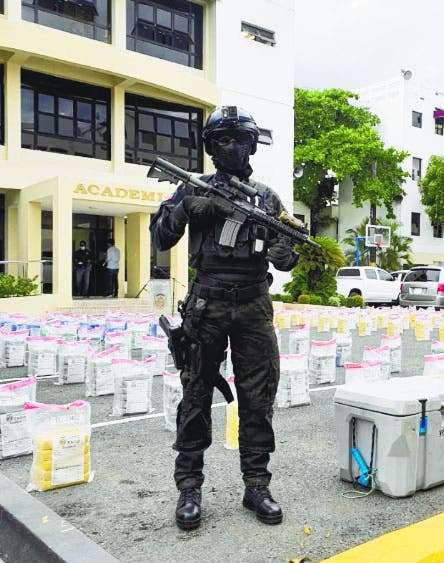 The National Drug Control Directorate (DNCD) with the support of the Navy, the Air Force, intelligence agencies and under the coordination of the Public Ministry, seized a shipment of 897 packages presumably cocaine, in an air, maritime and land interdiction operation, deployed next to the coast of the municipality of Baní, province of Peravia. Today / External Source 04/30/21

The shipment would have come from South America; there is a detainee

The National Drug Control Directorate (DNCD) reported yesterday that a shipment of 897 packages presumed to be cocaine was seized in operation near Baní, Peravia province.

A note from the entity indicates that a man of Aruban nationality was arrested, detained after several follow-up raids, carried out together with the Public Ministry.
The anti-drug institution said that after intelligence work, they followed up on the occupants of a speedboat that would have reached Dominican shores from South America, who tried to bring into the country 35 bales of cocaine and a bundle with eleven packages of marijuana.

The DNCD indicated that the individuals, upon noticing the presence of the agents, both from the Navy and the Air Force, reacted with gunshots, which started shooting, with no reports of injured persons so far.

He said the men abandoned the cache and ran into a wooded area in the area and that authorities want them. He adds that later, with a court order, they raided a beach house near the coast of Matanza, occupying another bundle in the yard, with 25 packages, for a total of 897.