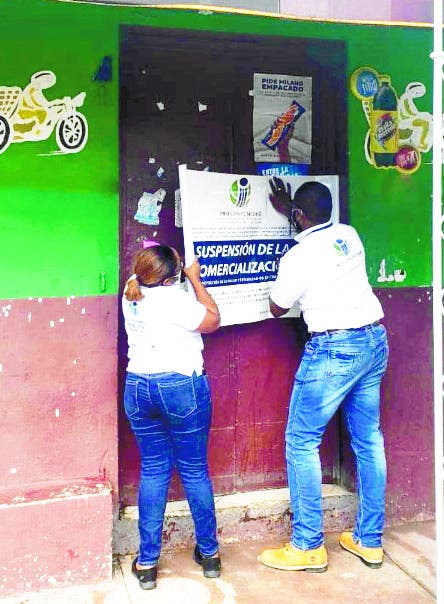 The executive director of the National Institute for the Protection of Consumer Rights (Pro Consumidor), Eddy Alcántara, declared this Sunday that this institution will maintain a "war without quarter" against manufacturers, distributors and sellers of adulterated alcoholic beverages. Moment in which Pro Consumidor closes the trade. Today / External Source 02/05/21

There are already 147 deaths officially registered.

The National Institute for the Protection of Consumer Rights (Pro Consumidor) formally requested the Attorney General’s Office to initiate a public action against the owners of businesses closed in recent days to sell adulterated alcoholic beverages.

Up to yesterday, 147 people died due to methanol consumption, and 420 people were affected by the consumption of adulterated or counterfeit beverages containing this chemical.

A document states that the executive director, Eddy Alcantara, addressed a communication to the prosecutor, Miriam German Brito, and her deputy Yeni Berenice Reynoso, in which he requests a criminal investigation against the owners of these establishments whom he said were caught in the act.

“By means of the present instance it reiterates the request before the Attorney General’s Office so that in the exercise of its attributions it initiates the setting in motion of the public action to the establishments that violate the regulations on commercialization of products,” says the letter.

It emphasizes that taking into account the national security issue decreed by the government due to the number of deaths caused by the consumption of adulterated alcoholic beverages, Pro Consumidor “has been carrying out since March the necessary actions to combat and eradicate the sale of these beverages together with other government entities throughout the territory.”

Alcántara said that on Wednesday, they deposited before the Public Prosecutor’s Office the documentation that compromises these establishments’ owners with the sale of these drinks, which have caused more than a hundred deaths in the last weeks so that these cases are investigated. Those responsible are prosecuted for the damages caused to society.

Operations. The organism has been active in the intervention to establishments and has asked for sanctions.
He said that the last businesses closed are in the Italia urbanization and the Narcisa I sector, in Santo Domingo East; the San Carlos, National District, and Primaveral, Santo Domingo North in Greater Santo Domingo.

He recalled that on April 27, they deposited before the Public Prosecutor’s Office the first fourteen files of the same number of businesses closed for this crime to proceed with the justice for the damages caused.

The official said that the inspection and surveillance of the last weeks have involved the intervention of more than 600 businesses in different parts of the country, especially in Santiago, San Francisco de Macorís, Puerto Plata, Dajabón, Montecristi, Monseñor Noel, Nagua, Samaná, Punta Cana, San Cristóbal, Gran Santo Domingo and other places.

Alcántara said that he is requesting the Attorney General’s Office to investigate the denounced businesses and any other person who may be linked to them in the course of the process, and consequently, sanctions will be imposed.