Cayetano Rodríguez considers “defending our sovereignty is not racism” 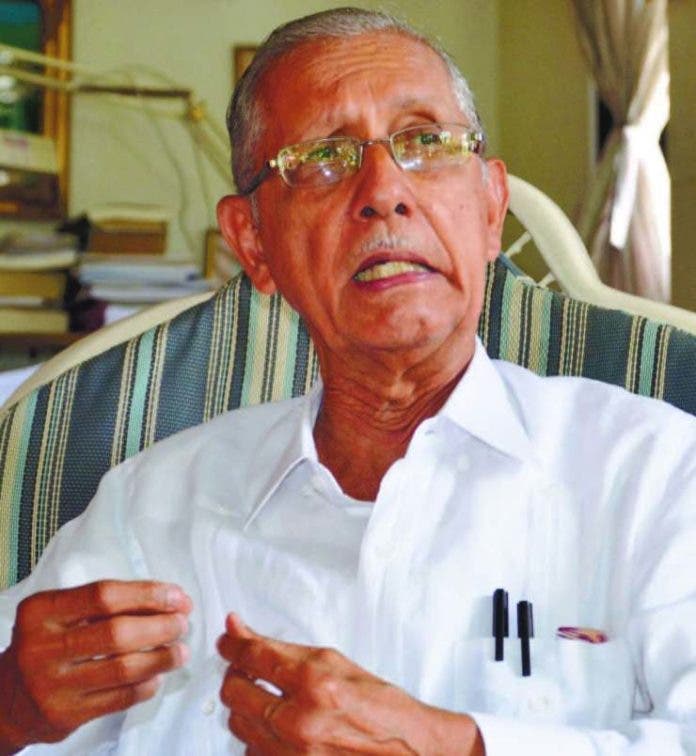 Cayetano Rodriguez del Prado, the author of the book “Notas Autobiográficas, Recuerdos de la Legión Olvidada” (Autobiographical Notes, Memories of the Forgotten Legion), which recounts his experiences during the dictatorship of Rafael Leonidas Trujillo, the years after the overthrow of the Bosch government and the 12-year government of Joaquin Balaguer, understands that they must help to improve the situation in Haiti, but said that the solution is not to dissolve or destroy the country to achieve it.

“There is no nation that can resist an uncontrolled immigration indefinitely,” said Rodriguez del Prado, who was awarded in 2008 with the National History Prize for the book mentioned above, whose purpose is to avoid that the militants of the Dominican Popular Movement (MPD), coming from the poor sectors of the society and who had no press or media to recognize their struggles for the sovereignty, demands, and democracy of the country, be forgotten.

In his treatise, he also recalls the participants of the MPD, as well as the June 14th Movement (1J4), the Popular Socialist Party (PSP), and the Dominican Revolutionary Party (PRD).

Rodriguez del Prado explained that the April 24 movement began as a military counter-coup that would reestablish the democratic order in the Dominican Republic with the return to the presidency of Juan Bosch, interrupted on September 25, 1963, by a coup d’état.

He referred to the former president as an idealist, intellectual, and writer but did not consider him a frontal combat politician.

“When he saw the forces that opposed him, they simply knocked him down and he accepted that situation. I cannot say that he did not fight, but he did not fight with the strength that some people expected,” he said.

He affirmed that when the movement began, the leftist groups that existed were not informed by the military.

“It was thought to be only a military movement but the situation got out of hand because it is very difficult to do something democratic without the massive participation of the people,” he declared.

However, once they discovered the plans of the revolution, they maintained active participation in them together with the bases of the PRD and the progressive wing of the Partido Revolucionario Social Cristiano (PRSC) that was not involved in the conspiracy and the military uprising that overthrew Bosch.

When the US troops disembarked in the country on April 28, part of my constitutionalist soldiers who participated in the revolt decided to withdraw, alleging that they were not prepared to confront the Americans.

For this reason, they handed over their weapons to the civilians so that they would be the ones to fight for national independence. According to the expert, approximately 250 soldiers were left fighting alongside the population.

“The North Americans never imagined that the Dominican people would stand up to them and that they would not surrender easily,” he said.

The April revolution was an event that reverberated around the world, so much so that the Dominican Republic received the support of various leaders from around the globe. Mexico, Cuba, France, and China were some of the countries that supported the struggle of the Dominican people against the invasion led by the United States. At that time, French President Charles de Gaulle, Chinese leader Mao Tse-Tung, Gustavo Díaz Ordaz of Mexico and Fidel Castro of Cuba spoke out.

Meanwhile, other nations, which Rodriguez described as “puppets of the United States,” supported the Americans to give legality to the invasion. Brazil, Costa Rica, Honduras, El Salvador, Nicaragua, Guatemala and Paraguay stand out.

For Rodriguez, the lesson of these events is that once the decisive moment occurs, the Dominican people unite to defend their nation and its independence from foreign powers.

During the meeting, he also referred to the problem of Haitian migration in the country. He considered that various international organizations understand that the problems of the neighboring country should not be solved at the expense of the Dominican people.

The writer said that migrations are good in all nations as long as they are carried out in a controlled manner and benefit both countries.

He said that the country could not have such a high percentage of Haitian nationals that it would cause the loss of the Dominican nation.

He clarified that he disagrees with the initiation of persecutions against Haitians but instead establishes an adequate migration regulation to comply with those who wish to reside in the national territory.

“Each country has the right to defend its sovereignty, that is not the same as racism,” he affirmed.

On individuals who justify Haitian migration by claiming that the country also has many Venezuelans, Rodriguez said that in proportion, Haitian nationals represent a much higher number than Venezuelans.

“For every Venezuelan in the country there are 90 or 100 Haitians if not more,” he stated.