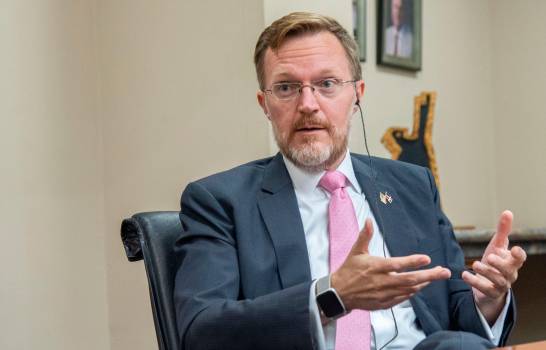 The Chargé d’Affaires of the American Embassy in the DR, Robert Thomas, assured that the United States is committed to cooperating with President Luis Abinader in his fight for police reform and administrative corruption that has touched almost all government agencies in the country.

Thomas expressed that “the challenges of corruption in the country are endemic” and that, to fight it, in addition to the efforts of the authorities and private companies, a cultural change is needed.

“I think President Abinader mentioned it in the recent high-level dialogue we had, and what he sees in relation to the police reform of the time and also some of these other issues, is that it’s not just about government officials or the private sector, it’s about a cultural change and I couldn’t agree more,” Thomas said.

The US diplomatic representative in the country also assured that more than merely economic aid, the US nation also technically collaborates with the country, providing assistance to help modify and strengthen government administrative procedures and processes.

“In this way we ensure that our experts work closely with the government, and that is part of the technical support. It is a support to ensure that the anti-corruption work is not dependent on who does it, but that a long-term reform is developed and that it lasts over time,” said Thomas.

He indicated that in every democratic country, there are these types of challenges, and he qualifies as positive that the population is keeping abreast of all the cases of corruption that are coming to light and that they are demanding transparency.

“What I see is that the Dominican people are speaking out and expect transparency. And I think that is a key part of the anti-corruption fight. Not only this government, but all governments have to be accountable,” the diplomat said.

US collaboration in the country is not only visible in the fight against administrative corruption with the recent signing of the US$6 million agreement, but also in the war against drug trafficking, where the US Southern Command continues to work hand in hand with the DNCD and other law enforcement agencies to curb these practices in the country.

The U.S. nation also donated some US$20 million for the launch of the 911 system and continues to collaborate in this regard to modernize call systems and data centers.

“The most valuable things we do together with the Dominican Republic are not about donating, but about working together and building strong relationships,” Thomas said.