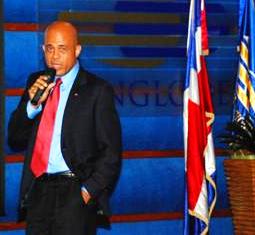 Santo Domingo.- Social movements of the Dominican Republic declared this Thursday ‘persona non grata’ the former president of Haiti, Michel Martelly, who has a concert in the country today Friday, at Hard Rock Café Santo Domingo.

In addition, Fenatrano and the Dominican Solidarity with Haiti, affirmed that the former Haitian president was a “puppet president” who came to power through a “major electoral fraud.”