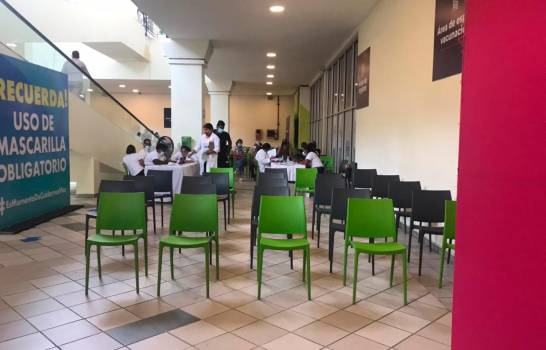 View of one of the vaccination centers that operate in Santo Domingo Este. (FREE DAILY)

From Thursdays onwards, there is a decrease in the number of people going to COVID-19 vaccination centers. Health personnel believes that the reduction is due to the recommendation of 72 hours without drinking alcohol after the application of the vaccine.

This Friday, several vaccination centers in Santo Domingo East and the National District registered a drop in the attendance of people seeking inoculation against the coronavirus.

According to those in charge of supervising these days, the reduced attendance could be due to the recommendation made by the Ministry of Health about not consuming alcohol after the inoculation.

The Ministry suggests not to drink alcohol for at least 72 hours after the vaccination. According to studies, this reduces the level of immunological response in people; that is to say, the vaccine would not have the proper effect.

In this sense, the person in charge of the vaccination day at Play la Zafra, Dr. Mayelin Dotel, explained that the attendance at the center during the first days of the week is good, but it is drastically reduced from Thursday onwards.

“Attendance at this center has been good, but the first days of the week because as they have to last three days without drinking alcohol, well the young people will not come and some older people. So from Monday to Wednesday productivity is good, but by the middle of the week it goes down,” she said.

Usually, they receive about 300 people; however, at noon this Friday, they have received only 60.

Meanwhile, the person in charge of the vaccination day at Megacentro, Saúl Mejía, indicated that today only 30% of the usual number of people attended the center.

“From Friday to Monday, the attendance drops in the centers…. Today I see a higher proportion of young people than on previous days, but the attendance today is at 30% of what is seen every day,” he said.

Mejia acknowledged that the reception was not so great on Monday, which he attributes to the possible consumption of alcohol on the weekend before the day. Usually, they receive more than a thousand people; however, this Friday before noon, they had only received 200.

The doctor pointed out that the age range of the people who come to this center is between 30 and 45 years old. “The population from 18 to 25 or 30 years old is not taking in so massively but it has increased,” he said.

The same situation was evidenced at the Vietnam Primary Care Center, where young people’s attendance is almost nil this Friday. Another of the centers that showed reduced attendance was located at the Santo Domingo East City Hall.