Manatees Juana, Pepe, and Lupita are on final stretch to freedom 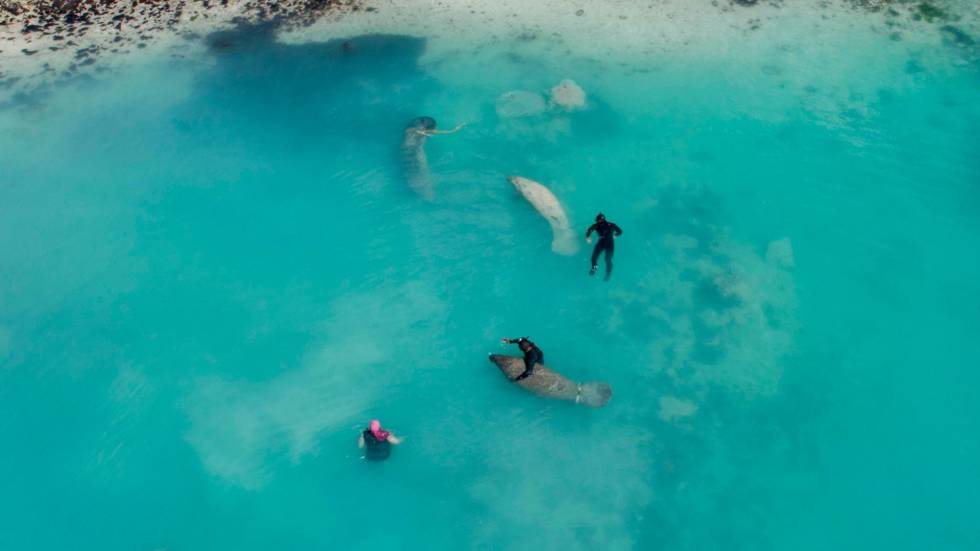 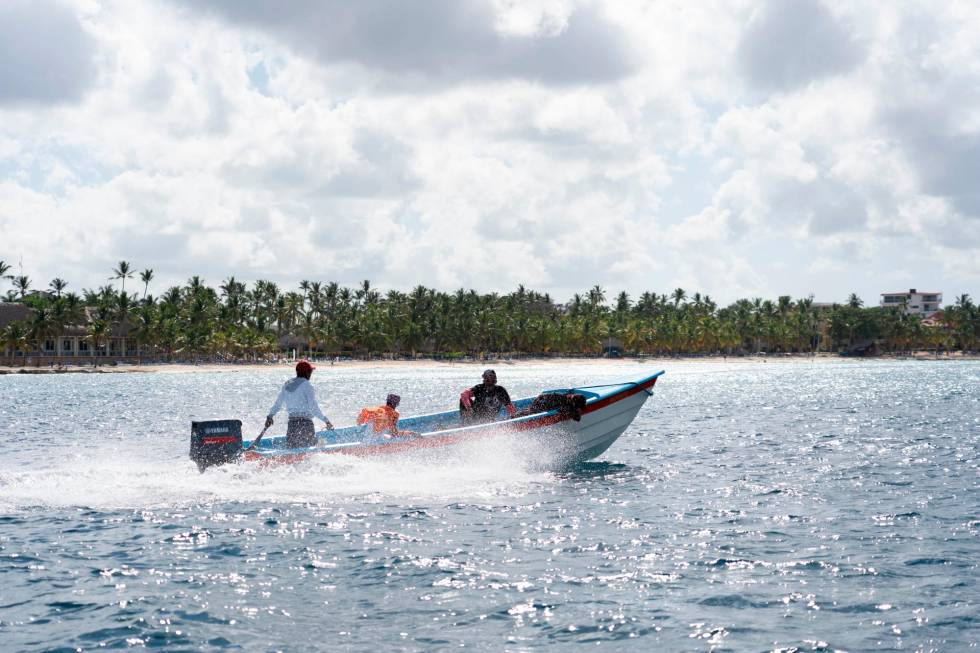 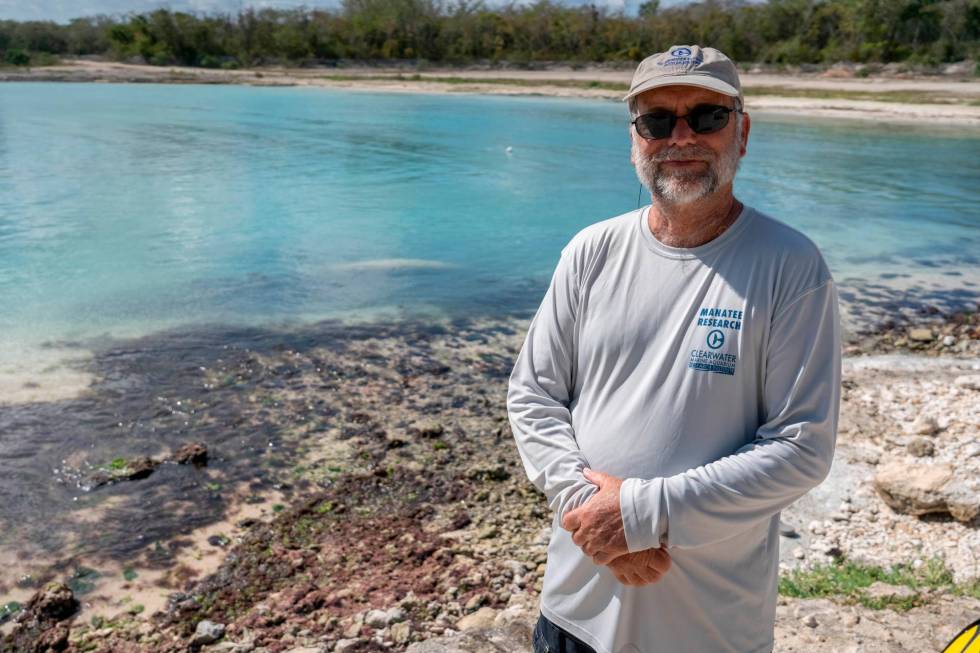 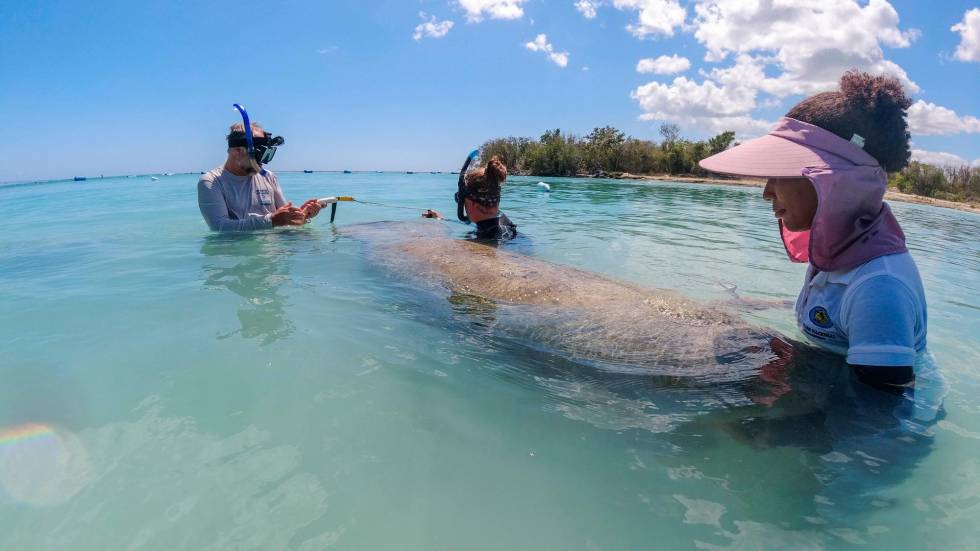 On Thursday, February 13th, Dr. James Powell entered the water with a special leash in his hands. Lupita, the smallest of the manatees in rehabilitation in Bayahibe, was guided towards the shore by personnel of the National Aquarium and Fundemar. At the same time, the vice-minister of Coastal and Marine of the Ministry of the Environment, José Ramón Reyes, carefully observed the operation.

Dr. Powell is the executive director of Clearwater Marine Aquarium in the United States, who for more than 40 years has worked to conserve manatees and other endangered species worldwide through science and education. With an integrated approach to unlocking solutions to conservation problems, his efforts have protected coastal areas in Florida, West Africa, Central America, and Cuba. 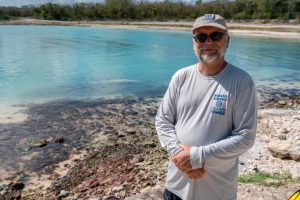 Dr. Powell is the CEO of the Clearwater Marine Aquarium of the United States. ( MARVIN DEL CID )

Powell holds in his hands a leash that will hold the tracker that will be placed on each of the manatees before they are released into the wild.

The renowned conservationist explains that the state-of-the-art trackers will be attached to a leash that the animal drags along attached to the base of its tail. The device is automatically activated when the manatee comes out to breathe, sending pulses to a satellite with its geo position. This will serve to monitor the movements of each manatee in real-time, in addition to sending a radio signal to be located with a portable receiving antenna up to 5 kilometers away in open waters. These leashes have a safety mechanism so that if the animal gets caught on rocks and other objects on the seabed, it will easily detach, leaving the animal free.

James takes time to explain to all the technical staff of the National Aquarium, Fundemar, and Environment how the leashes and receivers are placed, how they work, and how to track each animal when they are released while answering questions from the entire team in charge of the animals.

James explains to Diario Libre that he has found the animals in excellent physical condition for their release and appreciates the tremendous effort that has been made in the Dominican Republic with these three individuals. One of the program’s great successes has been to get the animals to base their diet on 100% seafood, which has been achieved a few weeks ago. 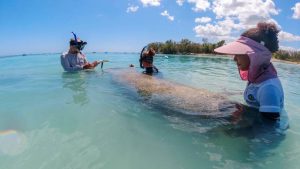 The animals are in excellent physical condition for their release. ( MARVIN DEL CID )

Within minutes of entering the enclosure containing Juana, Pepe, and Lupita, Dr. Powell, with the help of Rachel Plekaniec, from Fundemar and Karina Hierro, from the National Aquarium, manage to attach the leash to Lupita’s tail quickly. At the same time, the other technicians prepare Pepe and Juana.

Pepe and Juana decide not to cooperate with the specialists and become elusive in the face of multiple attempts to place the leashes. It was necessary to vacate the bay and wait a few hours for the animals to lower their stress and set the leashes successfully.

The trackers and logistics were obtained thanks to funds donated by the German Embassy in the Dominican Republic.

The danger of the boats

Last February, marine marker buoys (yellow) and diving point markers (orange) were installed to provide more excellent safety to visitors to the area, protect the manatees that live in the area, and protect the coral reefs from possible damage due to anchoring, in charge of Fundemar.

These works were carried out in coordination with the Navy, the Ministry of the Environment, and the Tourist Cluster of La Romana, with SENPA, Auxiliares Navales, and U.R.S.A. However, dozens of boats are not respecting the measure, sailing well above the 12 knots allowed within the perimeter of the buoys.

Diario Libre was able to verify the infractions and even received insults from a boat when noticing that they were photographed sailing at high speed very close to the coast and active dive sites. However, more than 60% of the vessels observed are respecting the distance demarcated by the buoys. 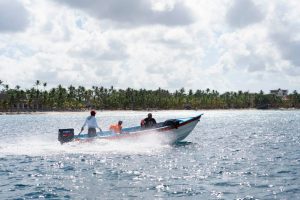 Rita Sellares, director of Fundamar, clarifies that a significant part of the boat captains respects the measures to protect the marine fauna and the recreational divers. Still, a few continue not to appreciate the actions without real sanctions.

For his part, the Vice Minister of Coastal and Marine, José Ramón Reyes, who was able to verify the infractions, regretted that these captains do not abide by the regulations and called on the responsible authorities, the Dominican Navy and Cluster Turístico, to enforce them. “The offenders are mocking in our face,” lamented the official.

In turn, the vice minister was satisfied with the work done with Juana, Pepe, and Lupita, who are already in the final stretch of their return to life in freedom, which will be in the coming weeks.