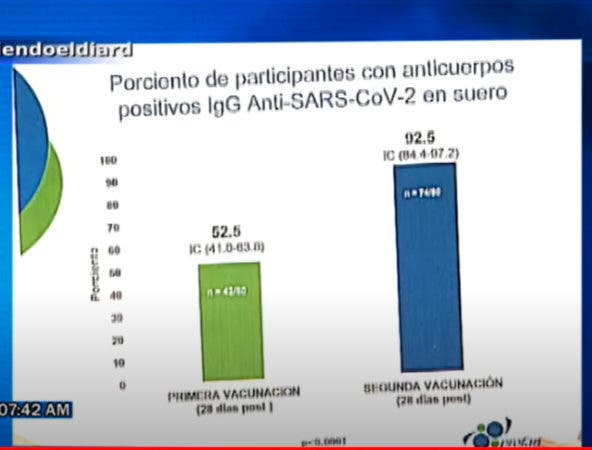 Following the National Vaccination Day start in the Dominican Republic, Pro Familia, through its director of Biomedical Research, Vivian Brache, conducted a study to identify what happens when the two doses of the vaccine against covid-19 are received.

Brache conducted a study with 80 people who work in the organization and received the first phase of vaccination with Sinovac. Brache described the results of his research as encouraging. 52.5% of those vaccinated with Sinovac had measurable antibodies in their bodies with the first dose.

By the second jab, 92.5% of those inoculated had positive antibodies to protect against respiratory disease.

The side effects of the vaccine were redness and pain at the injection site. Some 13% reported headache, 5% reported fatigue and muscle pain. Brache offered the findings of her study during an interview on the program El Día.

The report of vaccinated states that as of this Thursday, two million 658 thousand 818 citizens received the first dose, 829 thousand 313 of these received the second jab for 3 million 488 thousand 131 doses applied.