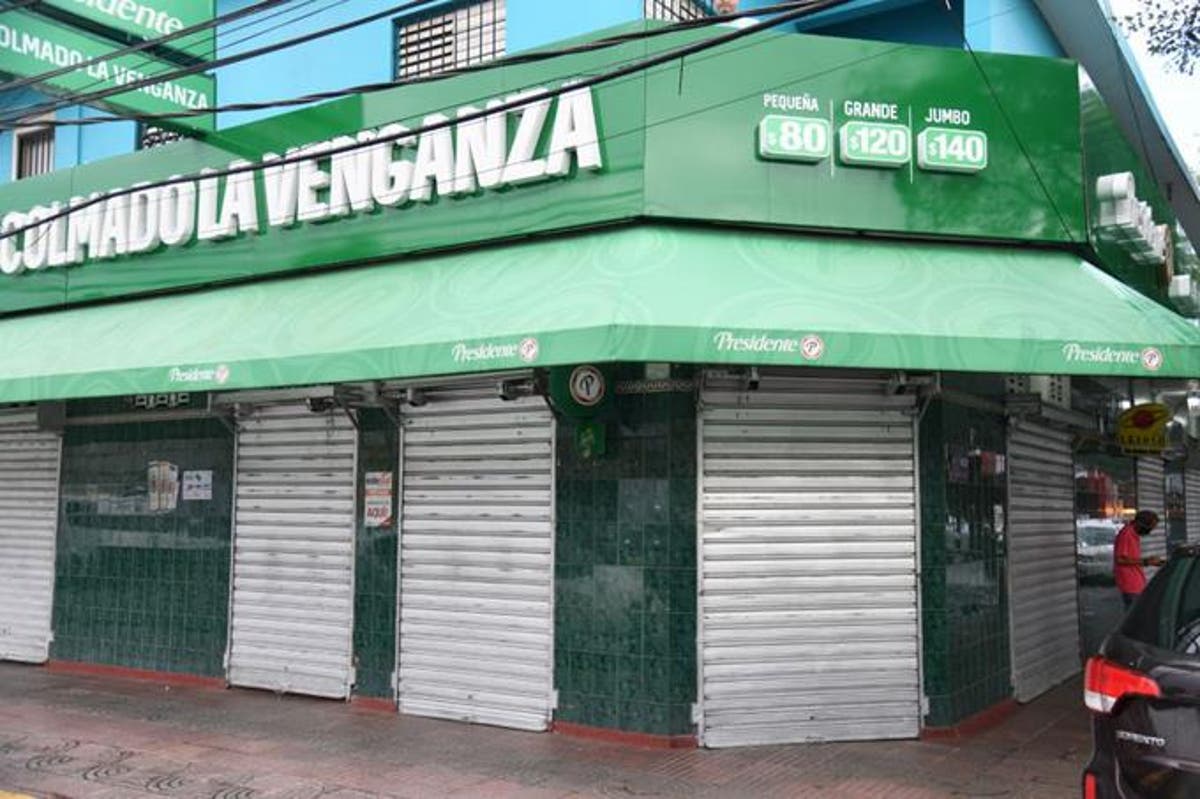 The emblematic center for the sale of beverages or "colmadón" La Venganza looked like this on the first day of the new curfew imposed by the Government to stop the high level of Covid-19 infections. JORGE CRUZ / LISTÍN DIARIO

In the different sectors of Greater Santo Domingo, the tranquility offered by the closure of most businesses and the control of the sales of alcoholic beverages was notorious.

At 5:40 minutes, employees of the various restaurants around Colon Park picked up the chairs and tables while some customers were reluctant to leave.

Tourists and regulars to the park were shuffling with the desire not to leave, but the rush to close was imposed by the proximity of the curfew start time. Some businesses such as supermarkets, stores, ice cream shops, Gift Shops waited until the last minute to lower the aluminum door on El Conde Street, in case some tourists who were still walking around ignoring the time decided to buy. Others received customers until 6:00 a.m., and although the business was in operation, they only attended to those already inside the place.

The idleness was more noticeable in businesses and informal vendors such as artisans, hairdressers, and paleteras, which remained open past 6:30 in the evening. Employees were waiting for the order of their supervisors to close. Businesses like the Cafeteria & Bar Paco, in front of the Independence Park, after 20 minutes of curfew, were waiting for about a dozen diners to finish their orders before closing.

During the whole tour of the Listín Diario through the businesses of the Colonial Zone and surrounding neighborhoods, despite the presence of agents of the Specialized Body of Tourist Security (Cestur), no action to enforce the curfew was noticed, even if the businesses remained open past the established hour under their noses.

Near the Colonial Zone
When traveling around 7:00 p.m. in the neighborhoods surrounding the Colonial Zone, most of the businesses were observing the curfew because their doors were closed; however, some were selling out of the windows, through half-closed doors, and customers were wiggling around them.

Likewise, several “frituras” and street vendors were observed to remain in the streets without fear of being apprehended since no movement of the agents in charge of enforcing the presidential decision of the curfew was sighted.

In other GSD neighborhoods
From 5:30 in the afternoon, the businesses on the popular La 20 Street were gathering their merchandise to finish the day on Wednesday, a day which had the particularity that by 9:00 at night, everyone had to be locked up to comply with the mandate of the Executive Power.

In Ensanche Luperón, as well as in Capotillo, Gualey, La Ciénaga, and Guachupita, the residents stayed away from the schedule this Wednesday.

Neither were the popular “teteos,” or the usual parties on Venezuela Avenue observed.

In the Ensanche Ozama and the Alma Rosa sector, businesses blocked the entrances shortly after 6:30 pm.

So did the residents and business people of San Vicente, Catanga, and Los Cartones de Los Mina.

The main avenues were illuminated by the flash of vehicles accelerating to reach their homes before the appointed time. On the Carretera Mella, cars were moving fast.

In the neighborhoods of Villa Faro, Cancino, and La Campana de Villa Faro, residents, although not distanced, were at the edge of their homes. While in Villa Francisca, Los Tres Ojos, Los Farallones, and Ensanche Isabelita, the doors of their homes were closed after 7:00 pm.

The Government issued different curfew schedules, depending on the levels of contagion in the provinces. The districts with the highest level of positivity must close the doors of their businesses at 6:00 pm from Monday to Friday and on Saturday and Sunday of this week from 3:00 pm to 5:00 am.