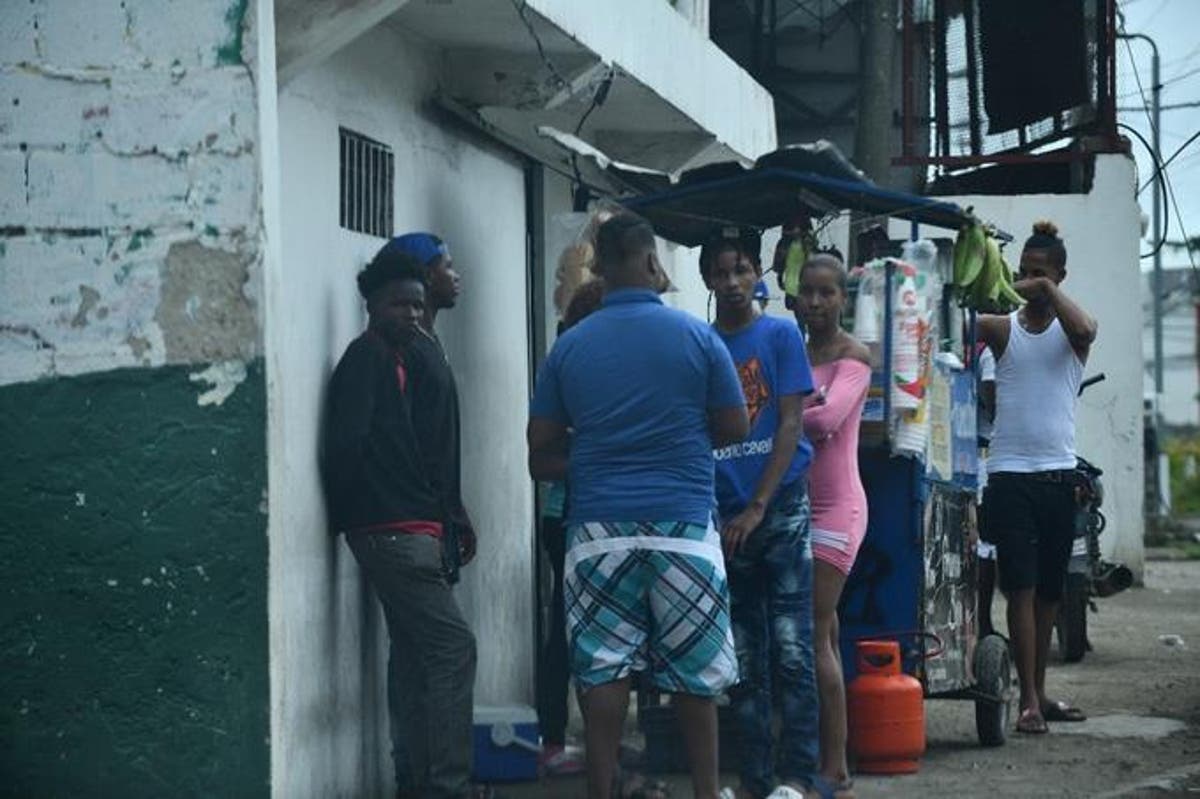 People continued to enjoy themselves outside their homes after the curfew began on Saturday at 3:00 in the afternoon.

It was a rainy afternoon with free traffic until 6:00. And although the formal businesses were closed by order of the Government, the fronts of the houses served as recreation even to have “a drink.”

The restriction of the sale and consumption of alcoholic beverages in public places did not discourage five to eight neighbors from gathering in the corners of the neighborhoods to play dominoes and drink beers. 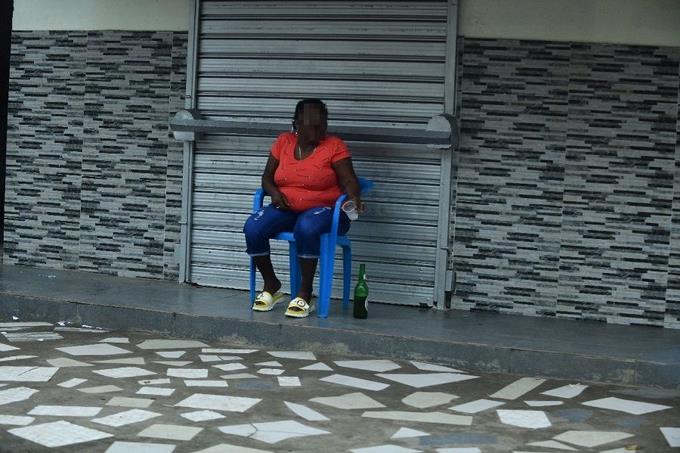 Article 8 of Decree 349-21 establishes the new restrictions in force since last Wednesday prohibits the sale of alcoholic beverages to be consumed in public and private spaces for public use from 3:00 in the afternoon and consumption of these products in said places.

Without fear of fines or reprisals, men and women of all ages gathered on sidewalks in sectors such as Villa Francisca, Pantoja, and Capotillo, among others, with bottles and glasses of alcohol in hand, and some of those already used were carefully placed next to them on the sidewalk as they sat in chairs. 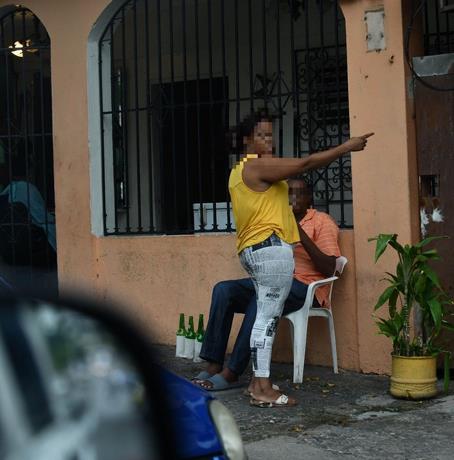 At the same time, young people and children took advantage of the reduced traffic to play basketball on the streets and baseball on the sidewalks. In addition, there were many businesses located in commercial avenues that before 3:00 in the afternoon, when the curfew began, they had already collected their goods and closed their doors.

As the hours passed and entering narrower streets and secondary roads of urbanizations, semi-open grocery stores were observed that passed goods to their customers through small holes or windows. 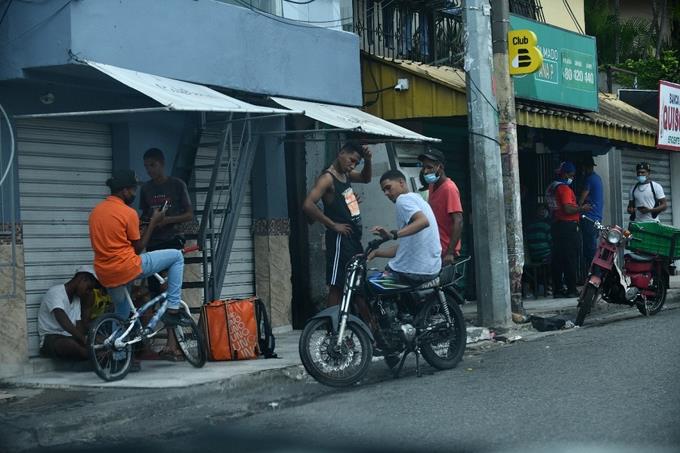 Although it was not observed that drinks or products passed by as in the previous cases, bars were also half-open.

There were other groups of friends and families who, as usual, sit on the sidewalks to watch the afternoon go by and talk. Dominoes were not only played as a hobby but also playing cards. 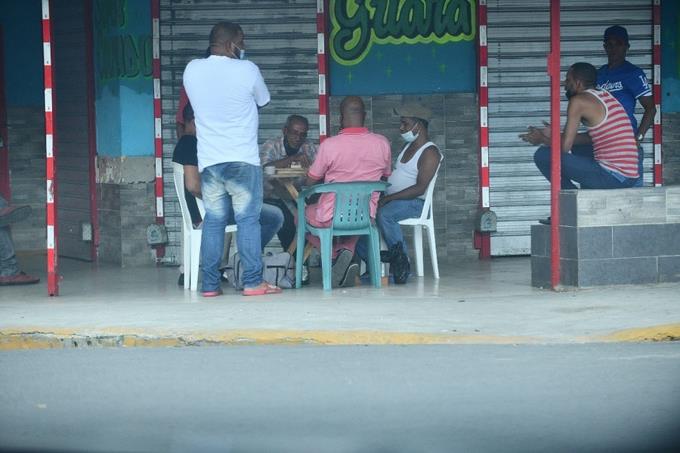 An hour after the curfew began on Saturday, on Avenida 27 de Febrero, the elevation of that busy road sheltered from the possible rain, a long line of people who were waiting for one of the few buses that traveled to the Morgan.

While the commercial houses on Duarte Avenue were desolate, the streets surrounding this commercial vein of Greater Santo Domingo were selling vegetables and fruits. Those who were just getting out of work took advantage of the small trucks selling groceries to get their supplies.

Informal commerce seemed exempt from the measures, beauty parlors, in-home salons, barbershops in galleries, street vendors, coconut vendors, greengrocer, and food vendors in Villa Consuelo, Guachupita, and Los Guandules, even though an hour and a half before the curfew began.

With the new schedule, Saturdays and Sundays are shorter days, so from early hours the sex workers, who recently commemorated their day, offered their services in Villas Agrícolas.

In the most central areas, there was a striking flow of vehicles in the Drive-Thru of the pharmacies, while the only customers of the fast-food centers were the deliveries who came to collect orders.

With an hour to go until the free grace period traffic ended, the capital city streets were almost empty.

In previous tours, in full curfew, Plaza Güibia, Plaza Juan Barón, and Parque Eugenio María de Hostos had been observed with people, but today they were desolate, even the dogs seemed to respect the restriction because not even one of them or any cat was sighted in the area.

At 5:20 in the afternoon, a brief drizzle forced a group of men on Padre Billini street to take shelter in the living room of the house in front of which they were playing to finish the hand of dominoes they were playing. So, likewise, the bohemian life that illuminates the Colonial City had already taken shelter at home.

On the busy Calle El Conde, a few tourists walked back to their hotels, and citizens returned to their homes, hoping that the rain would allow them to arrive in the minutes that remained.

Along with the near end of free movement, there were recklessness, disrespect for traffic lights or traffic signals, and driving at high speeds for little reason causing the occasional accident.

The first and only Saturday that, for now, includes the decree made on May 31, is a sign of the desire of citizens to return to the normality in which they lived before the Covid-19 pandemic that has impacted the country since March 2020.