Motorcyclists obtain driver’s license after many years on the street 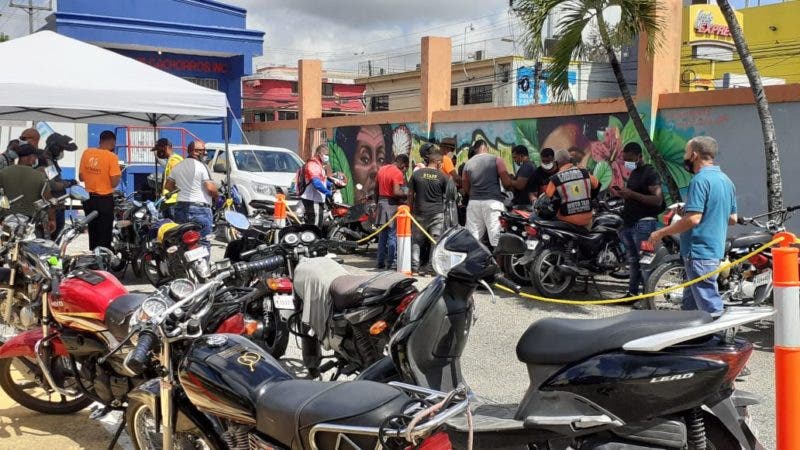 This Tuesday, dozens of motorcyclists went to the Club Los Cachorros de Cristo Rey to regularize their motorcycles for the first time.

Such is the case of Juan María Valdez, a watchmaker who says he has been driving motorcycles since 1983 and had not sought a driver’s license until today.

“I had not taken out my license before because there were not so many crimes committed on motorcycles,” he said.

Miguel Antonio Clase Mercedes is a motorcyclist who works at the bus stop at Gustavo Mejia Ricart and Winston Churchill Avenues.

“I came here to be legal on the street, when the Digesett agents stop me I must have all my documents up to date, my license up to date,” said Rey Galván de los Santos, a motoconchista who has been working for ten years.

The men of the two-wheeled vehicle indicated that due to the obstacles for delivering the document by the authorities, they were not motivated to register and obtain the driving license; these ranged from slowness in the process and the appearance of alleged false fines.

Last Saturday, the National Institute of Transit and Land Transportation (INTRANT) launched the National Motorcycle Registration Plan as part of the National Strategy for Citizen Security.

The registration pilot, which will soon be carried out nationwide, began at the Los Cachorros Club facilities in the Cristo Rey sector of the capital, the parking lot of the National Zoo, and the vicinity of the Quisqueya Stadium with the immediate attendance of hundreds of motorcyclists.

Every person who owns a motorcycle must register it and have a driver’s license regardless of the use or function of the vehicle.

In compliance with Law 63-17, the National Registry of Motorcycles establishes as mandatory the use of the protective helmet labeled with the motorcycle license plate and obtaining a category 1 driver’s license.

The measure is adopted considering the existence of motorcycles that, for various reasons, are not identified with the plate, nor the corresponding documents and, in that sense, will proceed to register them under the direct responsibility of the user of the same.

Each protective helmet will have a unique code that will be indispensable for registration while obtaining the motorcycle license plate is being carried out.

Likewise, the category 1 driver’s license will be issued for three years. It will have a cost of RD$600.00 for the user, which must be paid before the motorcycle registration, in the in-person or online modalities facilitated by INTRANT.