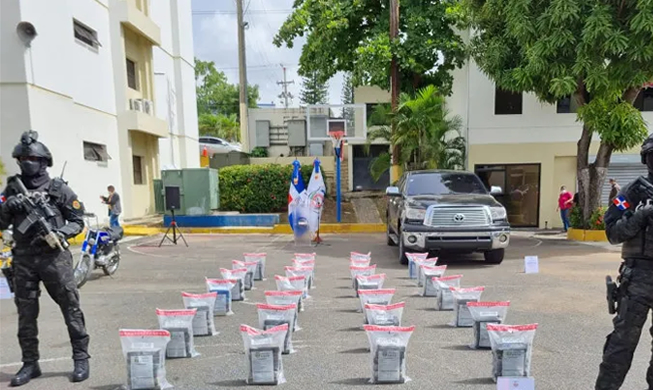 Santo Domingo.- The National Drug Control Directorate (DNCD) with the support of intelligence agencies and under the coordination of the Public Ministry, seized 168 packages presumably cocaine, in an operation deployed in the community of Bahoruco, Barahona province .

The anti-narcotics agents, following a criminal structure that operates in that area, raided a farm in Loma los Cacaos, finding seven sacks containing the packages of the substance hidden inside a shack.

The authorities carried out several simultaneous raids and operations, resulting in the arrest of seven people, including a Colombian, who is linked to an international drug trafficking network.

During the operation also were confiscated a 5.56-caliber rifle, with a magazine, a nine-millimeter pistol with several capsules, a black Toyota Tundra truck, license plate L-316318, two motorcycles, a bulletproof vest, with forged DNCD badges, cell phones and other evidence.

“In the land interdiction operation, four men were arrested at the farm, who tried to escape the persecution, while three others were intercepted on Larimar Street in that community when they were traveling in a van,” the press release said.

The authorities are intensifying the investigations, activating the location of other implicated persons, some of them identified, for which they are urged to surrender to the authorities.

The DNCD, with the support of the Armed Forces, the Attorney General’s Office, the Police and intelligence agencies, have succeeded in seizing important drug shipments in recent weeks and arrested individuals who are members of drug trafficking networks, who try to use our territory for their criminal activities.