Vaccination against covid-19 is not an option, but a citizen duty 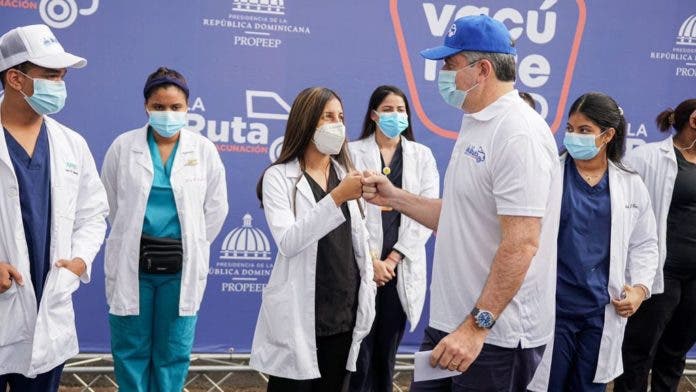 The minister in charge of Strategic Projects and Special Programs of the Presidency (Propeep), Neney Cabrera, affirmed this Saturday that vaccination against the SARS-COV-2 virus “is not an option, but a citizen duty,” for which he urged citizens to go to the centers that operate throughout the country to prevent covid-19 disease.

At the head of the day, “The Vaccination Route” during an act at the Juan Pablo Duarte Olympic Center, Cabrera said that this Saturday, June 19, and tomorrow, Sunday, June 20, some 10,000 people would be vaccinated in 10 neighborhoods of the National District and the Greater Santo Domingo.

The official highlighted the efforts of President Luis Abinader and the Vice President of the Republic, Raquel Peña, national coordinator of the Health Cabinet, who would be at the opening of the day, but excused himself because she was with the president in the South region, so that the entire population is vaccinated and herd immunization is achieved, which prevents new infections and more deaths from viruses and covid-19.

He expressed that to combat this pandemic, the world has no other means available other than the vaccine, and the Dominican Republic is not exempt from its attacks, and because of it, more than 3,500 Dominicans have already died in the country.

He stressed that, for this reason, in the body under his charge, Propeep, one hundred percent of its staff are already vaccinated.

He reported that on the day “The Vaccination Route,” 20 vaccination centers will be open in 10 neighborhoods of the capital and several municipalities of the Santo Domingo province.

This Saturday, the conference will occur in the Cristo Rey, Villa Consuelo, La Puya, and Capotillo neighborhoods, in the capital, and various sectors of Sabana, in the Santo Domingo Norte municipality of Santo Domingo, where two vaccination sites will operate in each one.

For tomorrow Sunday, the centers will be open in the Villa Francisca and María Auxiliadora neighborhoods of the National District; in the Boca Chica municipality; and in the sectors Los Guarícanos, in Santo Domingo Norte, and Café de Herrera, in Santo Domingo Oeste. In these, another ten vaccination sites will also operate, two in each locality.

He recalled that in addition to the “Vaccination Route” conference, three weeks ago, Propeep developed the “Vaccination Teteo” conference, which covered ten other neighborhoods in the National District and the Santo Domingo province, during which kits were delivered with soap and gel for hand washing and masks, just like this Saturday and will be done tomorrow Sunday.

On this occasion, the Propeep collaborated with several influencers who toured the different inoculation centers.

“As good Dominicans, we cannot settle for this, since we have a great responsibility to the country, that all Dominicans are one hundred percent vaccinated and vaccinated, as stated by President Luis Abinader and our vice president in charge of the Health Cabinet, Raquel Peña,” proclaimed the official.

He specified that according to this mandate of the president and the vice president, Propeep develops the day with all its integrated personnel, together with doctors, nurses, and assistants from the Ministry of Public Health, as well as with the cooperation of the Armed Forces, the National Police and others State entities.

“We are going to meet this goal, to be able to overcome and come out of this health crisis, which has generated a great national and global economic crisis,” he said.

“The only tool is to get vaccinated. All the Dominican people have to understand that it is a duty, a civic responsibility, towards him, with his family and with the country, that it is not an option, but a civic duty,” Minister Neney Cabrera insisted.

During the ceremony, Minister Cabrera was accompanied by his wife Gina Haché de Cabrera, his son Pedro Cabrera Haché, and other family members.