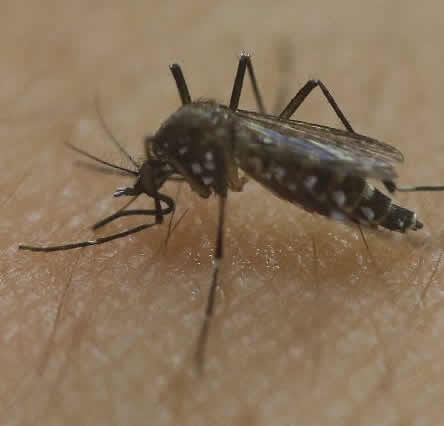 A female Aedes aegypti mosquito acquires a blood meal on the arm of a researcher at the Biomedical Sciences Institute in the Sao Paulo's University, in Sao Paulo, Brazil, Monday, Jan. 18, 2016. The Aedes aegypti is a vector for transmitting the Zika virus. The Brazilian government announced it will direct funds to a biomedical research center to help develop a vaccine against the Zika virus linked to brain damage in babies. (AP Photo / Andre Penner)

This year 2021 is not an epidemic for dengue; cases are monitored

Although the year 2021 is not highly epidemic, the Dominican Republic registers nine deaths from dengue and 588 cases. It is a viral disease that is transmitted through the bite of the Aedes aegypti mosquito. This viral and endemic disease has a high impact on the child population.

During epidemiological week number 22, 35 probable cases of dengue were reported; of these, 66%, that is, 23 of 35, are men; 63%, 22 out of 35 of the cases, are in the age group under 19 years, according to data from the General Directorate of Epidemiology in its report for week 22, which closed on June 5 of this year.

In the last four weeks (from 19 to 22), 122 cases were reported, for a total of 588 cases, including nine deaths. The fatality is 1.53%, and they have not yet been audited by the Clinical Audit Committee, which indicates the institution itself. The cumulative incidence is 13.08, representing a decrease in the variation of the rate of 83%, compared to the same period in 2020.

Dengue is a disease faced with community action; the population must cover the water tanks and place chlorine on the edges to prevent the mosquito from laying its eggs. It is also recommended not to have pots in the patios and increase hygiene.

Malaria For week 22, one confirmed malaria case was reported, autochthonous, corresponding to a 46-year-old man from the municipality of Santo Domingo Este. In the last four weeks, 12 cases were reported; for a total of 111 cases, one death is included.

The cumulative incidence is 2.47 cases per 100,000 inhabitants, reducing 82% compared to the same period in 2020. The provinces with the highest incidence of this disease are San Juan, Pedernales, El Seibo, Distrito Nacional, and Santo Domingo.

The health authorities report that they maintain the active community search for febrile, treatment, and investigation of the identified cases.