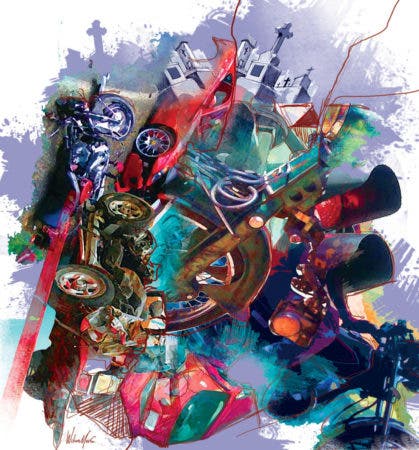 Difficulties. It has been clear that this is a problem that demands the leadership’s commitment. Otherwise, the Dominican Republic would continue to be the second country globally in terms of accident fatalities.

Surpassing in number of road events other countries with higher use of motor vehicles, and often placed in the second position in several tragic accidents registered per year worldwide, the Dominican Republic remains with high numbers of deaths in streets and highways in relation to its population, with three thousand fatalities on average, and RD$60 billion in costs to the State. And, above all, failing in efforts to modify its reality.

Behind the dynamics that generate collisions and overturns with significant human and material damages of an epidemic, profiles persist what the authorities themselves recognize that they have to face and that they describe as “a problem that requires priority and urgent interventions that demand the support and commitment of the leadership of the highest political level of the country.”

This is what they proclaimed when announcing for the 2017-2020 period the so-called “National Strategic Plan for Road Safety in the Dominican Republic.” But, unfortunately, the implementation of this short-lived project has not resulted in a substantial reduction of the risks run in the country from the condition of pedestrians, drivers, or simple occupants of vehicles.

Following this, coordination was initiated under a centralization headed by the National Institute of Transit and Transportation -Intrant- and supposed to end the inefficient “multiplicity of governmental institutions linked to transit and safety.”

However, tragic balances have not declined during traffic peaks during the Christmas and Easter periods and even in normal times, which months ago made Ramón Leonel Ureña, director of the Traffic Accident Mortality Reduction Program, show pessimism.
For him, at the time he was speaking, and now afterward: “when we go out on the street driving a motor vehicle or as a pedestrian, we become vulnerable users, since any eventuality in traffic can affect us.”

Last Christmas, characterized by confinements (but only for a part of the community) due to the pandemic, the corresponding citizen protection operation reported that 16 people lost their lives in road accidents in 217 cases, which also led to twice that number being taken to hospital emergency rooms.

Out of the control and participation of emergency brigades, it was estimated that 17 more people met a tragic end. The underreporting is presumed to be high due to failures in the methodology, or lack thereof, to measure the events as accurately as possible.

Alcohol is an aggravating factor. Ivelisse Acosta, who until recently was Vice Minister of Collective Health, said shortly before leaving office that one of every 20 deaths registered in the country is related to alcoholic beverages. “In relation to road accidents, more than 50% is proven to be linked to the use of this substance. Thirteen percent of the Dominican population has varying degrees of alcohol dependence.”

In the Dominican Republic, in disregard of the vast magnitude of adherence to alcoholic beverages, which is perceived with its higher rate in the young population, routine operations to discover the content of behavior-altering substances in the blood of drivers are not applied, nor are protocols in force, ordinary as in any other country, that prescribe blood tests to anyone who suffers an accident while behind the wheel, including cases in which the accident victims lose their lives and it must be determined if they were under the influence of alcohol.

When she was still prosecutor of the National District, Yeni Berenice Reynoso expressed the opinion that “whoever under the influence of alcohol, without having a license, kills three people should be punished for manslaughter with intent, not for reckless homicide.”
His criterion indicates that, besides the absence of repressive and Police measures against ingestions that alter the capacity to drive correctly, there is a lack of rigor and updating of laws to have efficient and exemplary sanctions in traffic matters.

Motorcycles and fatalities
What continues to be perceived daily is the inadequacy of the regulatory tasks of the General Directorate of Traffic Safety and Land Transportation, Digesett, weakly supported by the law to apply restraint to violations, particularly short in its scope on the population of motorcyclists in circulation, for whom the rules to be followed at intersections with traffic lights or with mere signs, absent in most of the crossings, are of little value.

They also stand out for not using protective helmets, not carrying authorization documents to ride, and third-party damage coverage.
In the Dominican Republic, the rate of motorcycle deaths is 149 per million inhabitants, a fatal mark behind Brazil, with a much higher demography, where 55 people die per million Brazilians every twelve months. This is according to a study called “The Safety of Motorcyclists in Latin America,” sponsored by an international insurance firm.

Although two-wheeled vehicles continue to be the means of transportation that causes the most deaths in accidents and that last year reached the fatal percentage of 71% of the cases, the official monitoring of road events reflected a decrease of 12% compared to 2019.
Other information coming from the statistical controls of the traffic area point out that the Ney Arias Lora Traumatological Hospital attended in the recent period a diversity of emergencies that 30% involved motorcycle drivers and passengers.

In 2018 (last reported list of cases), the health center provided immediate attention daily to 20 users of that means of transport; data expressed as an upward trend.

Civil insolvencies.
Insurance companies regularly provide evidence that 40% of the vehicles in transit through the national territory are not covered by their policies, with a high proportion of motorists who never take out the protections or let them expire, which are essential to guarantee the minimum coverage for damages caused in traffic mishaps. This violation of imperative norms makes the State-run up millions of dollars in health expenses to fill the gaps in insolvency.

The global lack of insurance for motor vehicles has persisted for years. It is estimated that only one-third of all vehicles that move daily on public roads, or a little more than 1,100,000 units, have valid insurance. A study of this same year, 2021, on the insurance industry in the country plainly states that: “Insurance penetration in the Dominican Republic is among the lowest in the region (Latin America) in line with the lowest banking penetration in Latin America.” (Special Report)

The former Superintendent of Insurance, Euclides Gutiérrez, frequently denounced the circulation of uninsured vehicles throughout the national territory, warning that: “it is the responsibility of the National Police, not of the institution I direct, to prevent thousands of vehicles from traveling on public roads without insurance.”

But the Police as such does not exercise any control over violations to the traffic law; a field circumscribed to its (in theory) subdivision which is Digesett, a body of moderate supervisory capacity which limits its application of authority to raising infractions without any relation to the magnitude of the offenses committed, including those which imply putting in danger the lives of third parties for driving while intoxicated, who are usually allowed to continue circulating. In other latitudes, they are automatically deprived of their freedom—wrong imprisonment.

Loss of mobility.
Fortunately, not all accident victims die, but not all of them advance towards a short-term recovery of their previous physical conditions to reintegrate into their usual activities.

The Dominican Association of Rehabilitation, which has spread with great social work throughout the national territory with 29 centers, reports that 12% of the people admitted to them have sequels after road accidents.
It is estimated that between 2,000 and 5,000 people a year depending on the recovery treatments available in the association’s workshops under the care of professional therapists for their reintegration into a productive life. Unfortunately, the care provided there is often beyond the ability of the injured to pay, but “nothing is denied to them.”

The majority of those affected, 60%, are between the ages of 20 and 49, the most economically active segment of the nation. Among the most common adverse physical conditions they present are fractures, amputations, spinal cord, and gill plexus injuries and traumatisms. These are physical disabilities from which they do not always return to total health and can even result in permanent disability.