Elsa’s passage through the Dominican territory 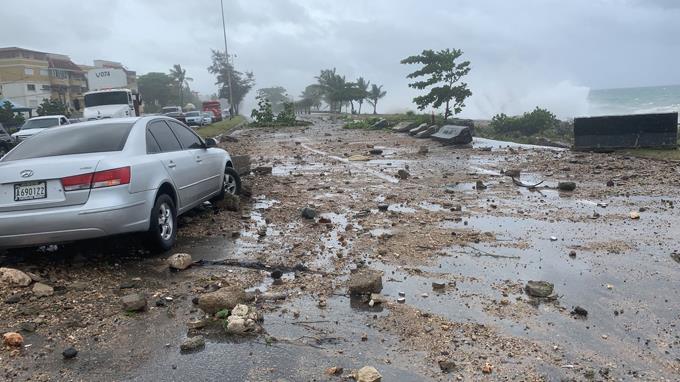 It had damaging effects in several provinces, specifically on the southern coast.

Some 24 houses affected, dozens of trees collapsed and obstructing roads, 118 people mobilized, three routes affected, seven people sheltered, and two deaths confirmed by the National Institute of Forensic Sciences (Inacif) are some of the damages left by Elsa as it passed along the southern coast of the country.

During its passage along the island’s southern coast, the hurricane lost strength and was downgraded to a storm category; however, it caused damage in several provinces.

Due to their national importance, some of the most striking effects occurred in Santo Domingo. As a result of the high swell of the Caribbean Sea, stones and debris were reported on 30 May Avenue and the Las Americas Highway, preventing regular traffic on these roads. As a result, the authorities set up alternate routes for both stretches and temporarily closed those stretches.

The electricity sector also suffered from the strong winds and rain of tropical storm Elsa. The Corporación Dominicana De Empresas Eléctricas Estatales (CDEEE) reported that 23 circuits were affected, for a total of 171,083 users affected by the lack of electricity.

Regarding these same affected users, Edesur indicated that they represent 18.56 percent of the total number of the company’s clients and that “corrective actions are being carried out to reestablish the electric service.”

Another entity that reported situations was the Instituto Nacional de Aguas Potables y Alcantarillados (Inapa), which reported that 36 aqueducts were also affected by the rains, of which 30 are totally out of service, and the rest are working partially, affecting 364,761 people.

The Ministry of Public Works, the Ministry of Education, the Administrative Office of the Presidency, and the National Police also executed contingency and emergency plans to help the population face this natural phenomenon.

At the provincial level, the Civil Defense of Barahona reported that, in the province of Bahoruco, the rains caused a wall to collapse, taking the life of a 15-year-old minor named Ariel Rubio.

In Samaná, there was a depression and settlement of the subsoil in the road section between the municipality of El Catey due to the saturation of the soil generated by the rains. Likewise, some internal landslides of the road-earth layers caused damages to the asphalt layer in the said stretch.

Barahona and Baní have been among the most affected provinces, according to what was expressed in a press conference by the director of the Emergency Operations Center (COE), Juan Manuel Méndez.

In San José de Ocoa, the Civil Defense indicated that due to strong winds, a tree collapsed, partially affecting a house. While in the municipality of Ranchitos, a similar event occurred, which limited traffic on Padre Billini Avenue.

While in the province of Pedernales, specifically in the Municipal District of Juancho, several trees collapsed and obstructed the roads, a similar situation occurred in the municipality of Constanza, La Vega. In Pedernales, Hurricane Elsa also caused damage to agriculture.

Although the hurricane has been downgraded to a tropical storm, Méndez urges the population not to be careless.

Drivers traveling on the country’s highways and roads should drive with caution due to the low visibility generated by the heavy downpours registered in most parts of the country. They also warn that citizens should refrain from crossing rivers, streams, and creeks with high volumes of water.

In the situation report of the Emergency Operations Center (COE), it was indicated that several public institutions which, in one way or another, could contribute to preventing the effects of the storm took contingency and emergency actions.

Different ministries, the National Police, Inapa, the Dominican Hydroelectric Generation Companies, the Dominican Port Authority, IDAC, Intrant, among other entities, took action in the face of the hurricane.