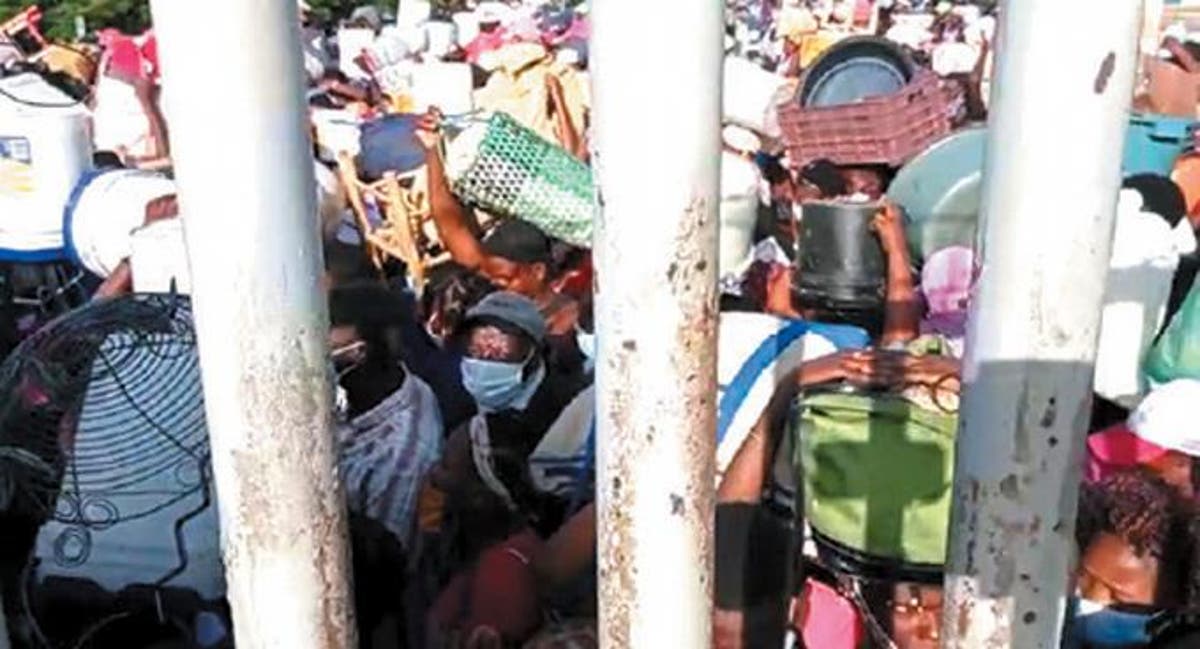 A large crowd of Haitians gathered yesterday around the international bridge corresponding to the Haitian side to enter en masse to the binational market and exchange trade with Dominicans.

Amid the tumult, several Haitians, mainly women, fell to the ground and were trampled by others who ran in a hurry to be the first to enter the binational market.

The significant accumulation of people at the Haitian border gate provoked the intervention of the Haitian authorities, who were assisted by Dominican soldiers, who together set up security cordons to organize the Haitian buyers and sellers so that they could enter the country in an orderly fashion.

After gathering, the Haitians entered the market in order, and after selling and buying merchandise, they returned to their country.

The Haitian merchant Antonio Fernan said that as a result of the pandemic, many products are scarce in his country, mainly in towns close to the Dominican Republic.

He stressed that this motivated many of his compatriots to enter the common market en masse to stock up on the goods they need.

“Many people were jammeded on the bridge trying to be the first to enter Dajabón to buy and sell. People were running, pushing and shoving and people suffered falls and some scratches,” emphasized the merchant.

Maribí Pierre, the owner of a small grocery store in the Mont-Organisé community in Juana Méndez, said that since Saturday, the establishments were out of stock and that this is the reason why so many people crowded yesterday around the bridge and the gate.

He also said that the suppliers from Cap-Haitien are not visiting the towns near and en route to the Dominican Republic because there are shortages in that city and neighboring localities.

Pierre said that yesterday, many traders and buyers arrived from Cap-Haitien, Fort Liberté, Lemonade, Trou Dunord, and other towns that are further away from this country. However, they are on the route to the Dominican border.

Other Haitians consulted by journalists revealed that if it had not been for the facilities offered by the Dominican authorities to stock up on products and merchandise that are scarce in their country, they would be having a very tough time.

Order
Despite the violence that affected Port-au-Prince and other Haitian cities last week, when 20 people were killed in Delma, hundreds of Haitians entered Dajabón on 2 July to trade in the Haitian capital.

Shortages.
Many Haitians said then that the violence that affected Port-au-Prince and nearby areas was also reflected in food shortages in towns in the North, Northeast, and Northwest of Haiti.