Third vaccination round is activated 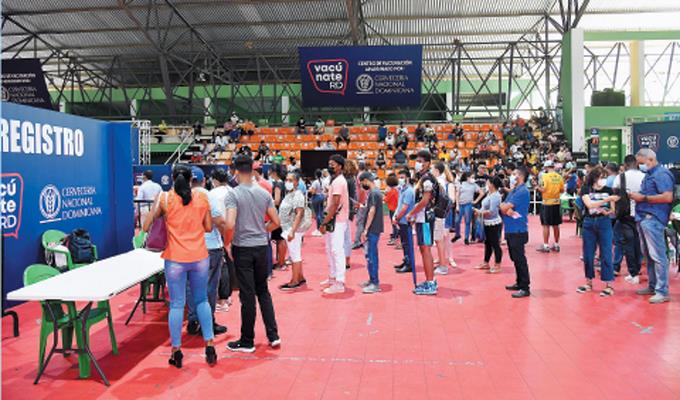 The vaccination center of the karate pavilion of the Olympic stadium registered a greater number of people yesterday.

The different vaccination centers of Greater Santo Domingo were attended on Monday, where citizens searching for the third dose of the covid-19 vaccine continue to increase significantly after the announcement of the Dominican government.

Before noon in the immunization center that operates at the Autonomous University of Santo Domingo (UASD), about 200 people had already been inoculated with the booster of a vaccine other than the one applied in the first and second doses, as reported Dr. María Matos, vaccination coordinator in the campus mentioned above.

From early on,
Matos also explained that the process is “very active.” They began to receive people from 7:30 in the morning.

The person in charge pointed out that the vaccination process for the first time has “slowed down” slightly. Still, to apply the second dose, large groups of minors attend because the 21 days for those in the age range of over 12 years who were immunized since it opened on July 1 had been completed.

In the case of the Pedro Henríquez Ureña National University (UNPHU), the representative of the vaccination center, Ramón Menéndez, indicated that the number of attendees for the third dose had not yet been counted but that “many, many” had already been inoculated.

“The influx of people has increased a lot, I would say that a lot in relation to the last few days, mainly the elderly and the health area are attending to get the third dose,” he said.

Likewise, Menéndez specified that the UNPHU had to reopen a second immunization area that had previously been closed due to the drop in demand for vaccines.

After it was announced and later formally began the application of a third dose against covid-19 in the Dominican territory, in addition to the doubts, the question also arose as to where the reinforcement would be registered if the cards of vaccination had only been designed for two doses and what would happen to those who laminated it.

As explained by some coordinators of the immunization centers of Greater Santo Domingo, the citizen is given a second ballot the same as the first and which is attached to the previous one.

The only difference is that in the second receipt, which guarantees that the person received the reinforcement against the coronavirus, “third dose” is manually written to the cardboard.

This alternative has been widely implemented in vaccination centers such as the Olympic Center, the Autonomous University of Santo Domingo (UASD), and the Pedro Henríquez Ureña National University (UNPHU), among others.

Therefore, plasticized or not, those over 70 years of age, adults with comorbidities, and health personnel only have to present their respective vaccination cards to receive the third injection of a different compound than the first two doses.

In the country, a debate has been generated over the government’s decision to apply a third booster dose to counteract the new strains of Covid-19.

Criteria.
Specialists from different branches of medicine say that the decision is correct, but others suggest that the first two doses be emphasized.

Different.
As ordered by the government, the third dose will be with a different vaccine than the previous two.