Provinces where new variants of SARS-CoV-2 have been detected

San Cristóbal, Hermanas Mirabal, and Dajabón are the three provinces of the country where health authorities have identified the circulation of the two new variants of SARS-CoV-2, considered to be of high severity and easy transmission.

According to the Ministry of Public Health, the British variant (B.1.1.7.) was detected in San Cristóbal, with a 50 percent increase in transmission, increasing severity in hospitalizations, and case-fatality rates. However, it has no impact on susceptibility to antibody treatment and minimal effects from convalescent and post-vaccination sera.

ICU beds are 70% occupied, and ventilators are 55% occupied.

In the provinces of Hermanas Mirabal and Dajabón, the P.1 variant (Brazil) is found, which presents a significant decrease in susceptibility to the combination of treatment with some monoclonal antibodies and has a minimal impact on neutralization by convalescent and post-vaccination sera.

Other covid-19 variants circulating in the country have been detected in these three districts and 19 other provinces.

The British variant is 45% more contagious, according to a study.

Public Health recommended that the corresponding authorities request PCR tests to passengers arriving in the country through airports and other arrival points to monitor the entry of new variants not present in the country.

In addition, to improve the reporting of antigenic tests in laboratories and to take advantage of the upcoming installation of a genetic sequencer at the National Laboratory to “intensify epidemiological surveillance” focused on new variants of coronavirus.

The country has registered a resurgence of the virus in the capital and Santo Domingo province, which led the Government to tighten restriction measures such as curfew and alcoholic beverages in these areas.

According to epidemiological bulletin 436 issued by the authorities this morning, 3,628 people have died in the Dominican Republic since the beginning of the pandemic, while 48,088 active cases have been registered.

WHO now considers the variant identified in India a cause for concern. 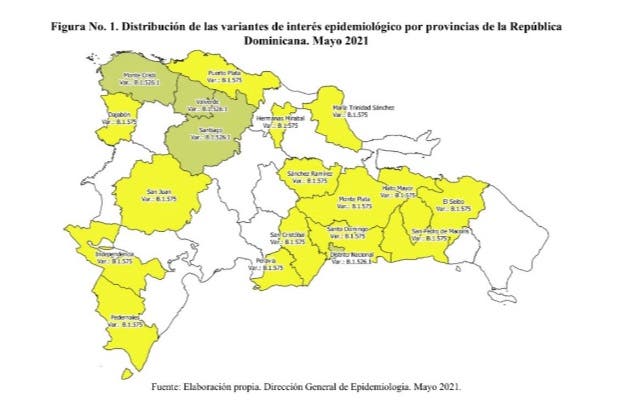