Meats are expensive and scarce according to shops 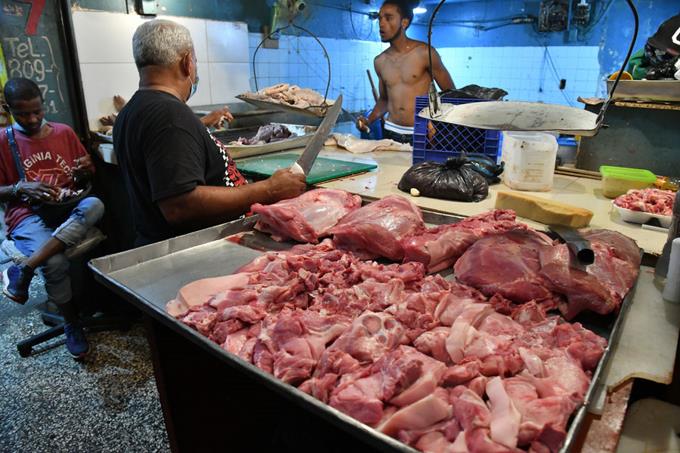 “Expensive and scarce” are the two words expressed in all the places where the different types and cuts of meats sold in various markets of Greater Santo Domingo are sold.

“It is going up, mainly chicken, and scarce as never before in history,” said Bill Bautista, an employee of one of the butcher’s shops established in Ciudad Ganadera.

According to Bautista, the business has not received the product in daily demand for almost four days. Due to the difficulty of its acquisition, it is being marketed between RD$78.00 and RD$85.00 per pound. Others consulted stated that they buy it from RD$75.00 onwards and “depending.”

The merchant explained that “with the chicken issue, we have to see what is going on” because if there were no chicken, the few units that reach them would be small, and on the contrary, they are supplied with five and six pounds. “Something is going on in the back to keep it expensive,” said Bautista and emphasized that they have had to “go out and look everywhere” to meet their customers’ needs. A similar explanation has Alexis Burgos, who said he does not understand how it is that “there are no so-called chickens, but the ones that arrive are six and five pounds.”

“Chicken is scarce when it is small… but exaggerated chickens are appearing, that is to say that where those chickens are there is no shortage. They are holding it back to keep the price up,” he said.

Burgo, who gets up every day at four in the morning to go personally to buy from his suppliers and then prepare the meat before opening his shop in the Villa Consuelo market, said that it is “a sacrifice” every day to find a little bit of the product that is the only one he sells to generate his income.

According to him, they used to buy approximately 80 units, but this figure has dropped to 40 and even 30 chickens.

IN POINTS
Beef.
Regarding beef, Bill Bautista pointed out that it is “quite expensive” and that its last increase was RD$15 so that the pound is sold at RD$160.00.

Pork remains unchanged.
Pork is the only meat that maintains its price between RD$100 and RD$110, the merchant indicated.