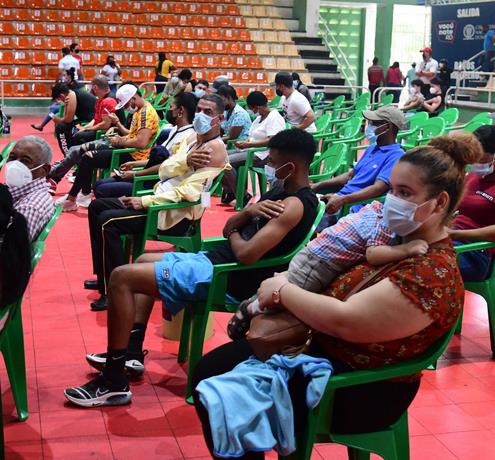 The Dominican population has responded to the call to get vaccinated against Covid-19.

Three weeks after the beginning of the reinforcement campaign

Nearly three weeks after the Dominican Republic formally began implementing the third dose of vaccination against the Covid-19 virus, some 288,558 people have applied that booster dose in the country. In contrast, nearly four million have completed their second dose schedule.

Since last February, when the National Vaccination Program against Covid-19 began, 9 million 746,981 vaccines against the virus have been applied in the country, according to data published on the official platform VacunateRD.

With the first dose
Regarding the first dose, the report indicates that as of this past July 25, 5,459,382 doses had been applied and that 3,999,041 people had already applied their second dose, completing their scheme.

The booster or third dose, whose application was launched on day eight, the report indicates that 288,558 have been applied nationwide.

The Dominican Republic ranks first in the region in progress in implementing immunization against the Covid-19 virus.

Third distinct dose
The third dose of vaccine is being given from a different pharmaceutical company than the first and second doses received by the person.

The country is mostly applying the booster dose or third dose with the vaccine of the pharmaceutical company Pfizer, whose consignments are arriving every week in Dominican territory.

The most used vaccine in the country is the Chinese Sinovac
The majority of the vaccinated population has applied the Chinese company Sinovac, which was the first to arrive in Dominican territory. The Covid-19 pandemic, whose first case was diagnosed in the country on the first of March 2020, has killed 3,937 people, and some 340,230 cases have been diagnosed through laboratory testing.

Different types of variants of the Covid-19 virus are currently circulating in the country, including two of those that cause more significant contagion and hospitalizations. Therefore, the health authorities have insisted on the need for the population to be vaccinated to avoid presenting critical conditions in case of infection.

Measures in New York
A cable from the EFE agency highlights that The City of New York announced that it would require all municipal employees to be vaccinated against Covid-19 or undergo weekly tests for the virus from mid-September.

Just days after announcing that measure for public hospital workers, Big Apple Mayor Bill de Blasio today expanded it to the rest of the City Council’s 340,000 or so employees, a figure that includes officials from all walks of life, teachers, or law enforcement.

The move comes when the pace of vaccinations has stagnated, and coronavirus cases are rising again strongly due to the advance of the delta variant.

According to the latest data, only 54% of the city’s total inhabitants have completed their vaccination, which means that more than three million people are unvaccinated.

LEARN MORE
For those vaccinated
With the surge of covid-19 infections by the delta variant in the United States, fully immunized people are wondering if they should return to using chinstrap in enclosed spaces. Anti-covid vaccines are effective against the harsher versions of the disease that lead to hospitalization and death.

Other factors
But experts told AFP that it’s not the same for everyone and that people should consider factors such as community transmission, personal risk levels, and their risk tolerance to decide what suits them.