Covid and heart attacks cause more than 100 deaths in Baní 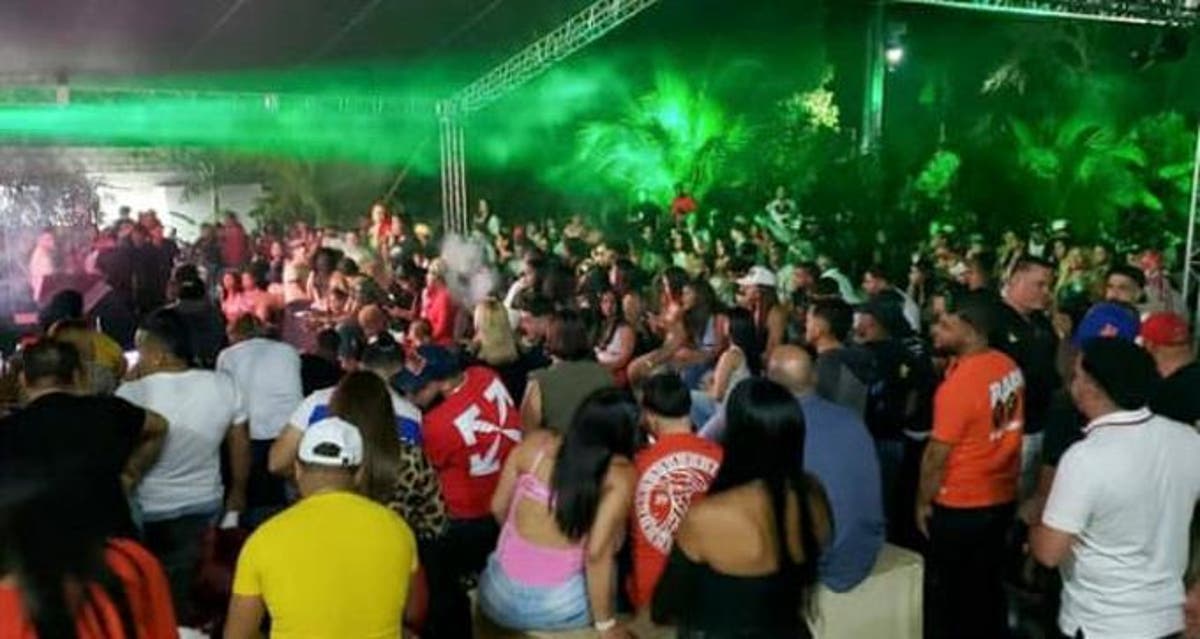 Nightclubs, drinks and grocery stores hold massive parties in Baní at the height of the rise of Covid-infected people.

Deaths from heart attacks, strokes, and respiratory failure, many of which are linked to the coronavirus, rose in Peravia province with alarming figures that would exceed 100 deaths in less than three months.

However, the Ministry of Public Health records 63 deaths from Covid-19 during the entire pandemic and a cumulative number of infections of 2,806 cases.

Regarding deaths, statistics from the Provincial Health Office indicate that of the 117 deaths in that southern district between May, June, and part of July, cardiovascular accidents and heart attacks total 69 and 30 due to respiratory failure, pneumonia, respiratory arrest. The other 18 deaths were from various causes, with the specifications that the information was not complete.

However, Listín Diario made a survey in which it found that only in 39 days of follow-up to deaths, in which not all demarcations are included, there are almost 80 due to heart attacks, coronavirus and causes associated with the pandemic, with the names and place of residence of the deceased. This includes May 31, from 1 to 27 June and eight days in July, alternating between 6 and 21. Since the data obtained here in the Public Health and civil authorities are incomplete and preliminary, deaths could be much higher from heart attacks, pneumonia, strokes, and others. In addition, many people die when arriving from their workplaces or while sleeping.

Death certificates
Death certificates obtained by various means, including relatives of the deceased, indicate that 25 people died of myocardial infarction; 11 respiratory failure, 14 for stroke, 10 for pneumonia.

Other causes that are causing deaths in this southern district, in addition to Covid-19, directly, are acute respiratory failure with 19, multiorgan failure 10; pneumonia, in its variants; acquired in the community, bilateral, severe, and acute, yields about 10 cases, although of the DPS, only 3 appear.

Sex and ages
The official data of the DPS of Baní do not specify ages, sex, or places where the deaths occurred, but the investigations made by Listín Diario establish that in those 39 days, 25 women died; 3 to 31 May, 15 in June, and 9 to 21 July, which ranges in ages between 40 and 66 years.

Places of origin
The deaths were in the municipalities of Baní, Nizao, and Matanzas.

In more than twenty neighborhoods of Baní, as well as in the rural area, the deaths from Covid-19 and its associated causes are mourned; Las Marías, María del Carmen, Santa Elena, Santa Rosa, Los Cajuilitos, 30 de Mayo, Pueblo Abajo, Centro Ciudad, El Fundo, and others.

The victims
All Baní has mourned the death of Banileja artist Clari Soto, who died on Saturday, July 17, due to Covid-19, in a clinical center in the capital.

The cases in June of Luisa Pereyra, on the 23rd and 24th Ernesto Santana and the 29th José Rodríguez, 73, both in Villa Fundación, are recalled. On the 25th, Gerardo Sánchez (Meloya/El Guacharo).

These cases also include the deaths of three foreigners; Kaj yo Yun (Korean), in Pueblo Abajo, Baní, as well as that of two Haitians, one of 56 years and another of 51, residents of Matanzas, both diagnosed, “death by acute myocardial infarction, diabetes Mellitus.”

Teteo doesn’t stop
The “teteo” (party gatherings) does not stop despite these numbers of deaths and infections. On Saturday night, a massive event was held in the sports center of Baní with a game of basketball and that same morning a caravan, during curfew hours, with motorbikes, jeepettes and cars traveled, honking, all the streets of Paya at the dawn of the patron saint festivities of that municipal district, even though the celebrations would not take place because of the pandemic.

Specialists speak
For cardiologist Carlos Ramírez, in Baní, there are important reasons why the number of deaths from these causes has increased.

These diagnoses are strongly linked to the cardiovascular risk factors that exist. He explains, such as; elderly patients with a picture of comorbidities. He pointed out arterial hypertension, diabetes, obesity, renal failure, and lung problems due to smoking and environmental pollution.

It highlights that 34% of the population is hypertensive, and of this, 17% do not know that it is, and of the other 17% who know, half do not receive medical attention.