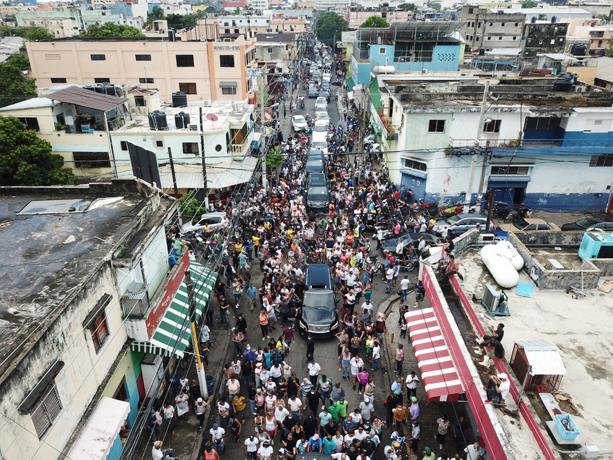 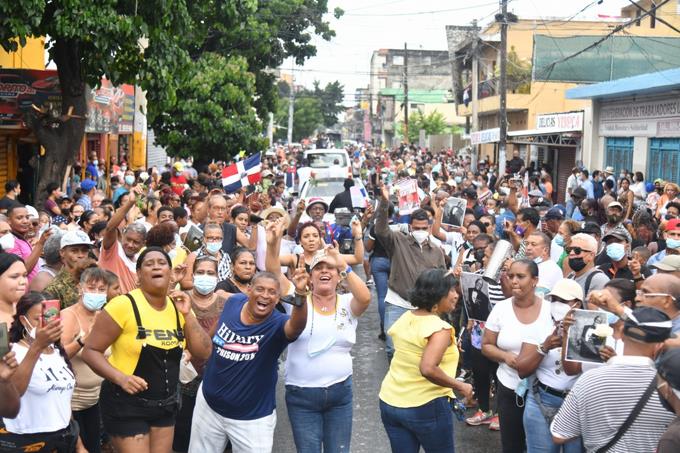 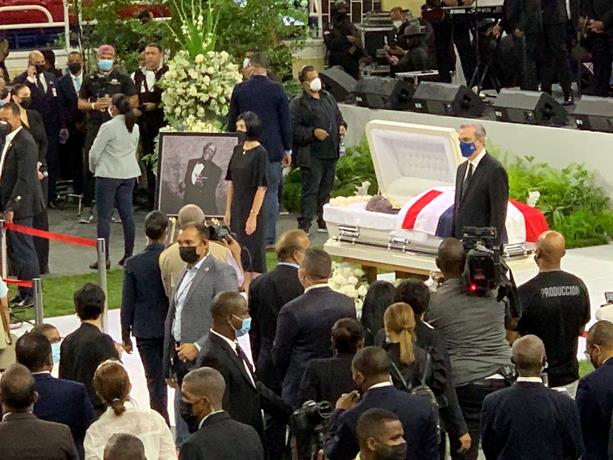 During a multitudinous tour, a drizzle showered hundreds of people who accompanied the hearse transporting the deceased merenguero Johnny Ventura to his resting place at the Cristo Redentor Cemetery.

The rain was not an impediment for family, friends, and fans of this music icon to bid him farewell after three days of wake, culminating with some emotional words before his burial.

Since early in the morning, dozens of people gathered outside the Palacio de los Deportes to say their “Last Farewell” to Caballo Mayor in a posthumous tribute before his burial.

With teary eyes and evident grief, citizens of all ages leaned on banners, handmade signs, and even with the message “Johnny Ventura LIVES” tattooed on their bodies, waiting to enter the event that began at 10:00 a.m. on Saturday.

The tribute included various artists who sang along with the orchestra with which the merenguero used to liven up his parties, directed by Henry Jiménez. In addition, at the request of the Ventura family, Manny Cruz premiered a merengue that he recorded with Johnny Ventura.

The attendance of various figures such as the President of the Republic, Luis Abinader, and his wife, Raquel Arbaje.

“Merenguero hasta la tambora” resounded in the Palace in the voice of Johnny Ventura’s son, Jandy Ventura, who bid farewell to his father with the music that made him famous and turned him into a legend in this earthly world. 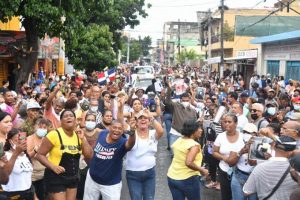 Half an hour after the scheduled time, the popular caravan began through Villa Juana, the neighborhood where Johnny grew up.

The streets of Máximo Gómez, Tunti Cáceres, Moca, and Mauricio Báez were crowded with people accompanying the hearse with the mortal remains of the artist.

From the balconies and roofs of the houses and premises, people expressed their affection and mourning for the unexpected loss of this icon of Dominican music. Some also threw roses or danced to the rhythm of songs played as the parade passed by.

The last stop of this part of the program of funeral honors for the artist was at the Mauricio Baez Club, space to which Ventura gave much support and which is one of the cultural and sporting pillars of Villa Juana.

As they advanced along John F. Kennedy Avenue, more and more people joined the caravan. On foot or in a vehicle, alone or accompanied, they all had the same goal, to show their affection before the burial of the singer of hits “El vecino está borracho,” “Capullo,” and “Pitaste.?”

As the caravan advanced, more people joined, on foot or in a vehicle. Alone or accompanied, they all had the same objective, to show their affection for the singer before his burial.

When they reached the Duarte Highway, the vehicles stopped. Many filmed the funeral procession, while from the top of the pedestrian bridges or standing on the sidewalks, some groups applauded when the hearse passed by.

Drinking and dancing, indispensable elements of the joy of Johnny’s music, were also present at this funeral, and the people extinguished part of their sadness, precisely with the singer’s art. 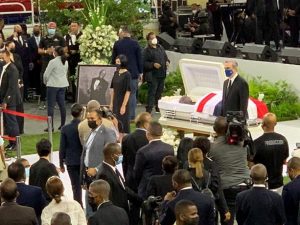 Even though the night was closing in on the cemetery, the massive participation of citizens despite the Covid-19 pandemic was the main show of affection of all those present.

Leonel Fernandez gave the eulogy at the burial of Johnny Ventura, which ended around 9:00 p.m., concluding this day of more than 12 hours.