Face-to-face classes will return in September 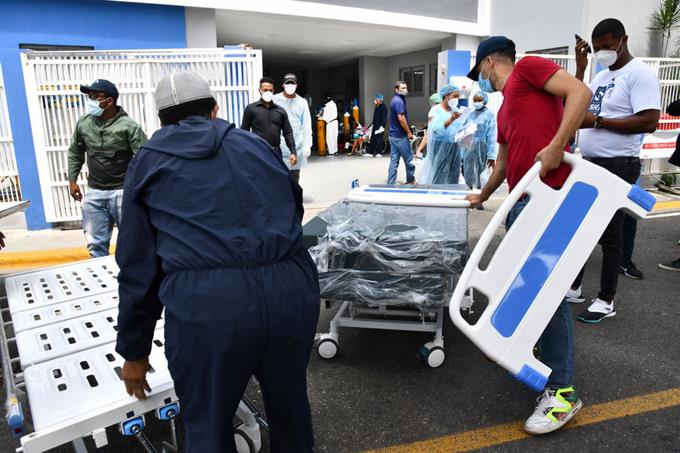 Roberto Fulcar said that equipment acquisition had been the most “efficient and transparent” of the Ministry of Education. The minister highlighted the achievements during his tenure.

President Luis Abinader said he promised to “save the school year” with the Ministry of Education.

“I kept my word, almost a year ago when I said that we would save this school year,” said the president.

Yesterday, President Abinader led the closing ceremony of the 2020-2021 distance and blended learning school year held in the esplanade of the Ministry of Education.

During his speech, he added that he is satisfied to know that the school year concluded despite taking the reins of government with an economic crisis caused by the coronavirus pandemic.

“That was my obsession (the evolution of the school year), that was my promise and this is the result. The future is here in the students and the teachers,” he said.

Minister of Education
Amid the controversy that began in early July over the cancellation made by the General Directorate of Public Contracting (DGCP) of 45 lots for the acquisition of technological equipment, the Ministry of Education (Minerd) cataloged the purchasing process as “the most efficient in the entire history of the institution.”

“Our management developed an extensive process of purchasing, contracting and awarding of goods and services. This process was the most participatory, efficient, ethical and transparent in the history of the Ministry of Education,” said Minister Roberto Fulcar.

The closing ceremony was led by President Abinader, who said that he fulfilled “his promise to save the school year.”

Last July 7, the General Directorate of Public Contracting annulled, using four resolutions, 45 lots out of a total of 56 contracted with some 52 winning companies to acquire 752 thousand netbooks, laptops, and tablets for the obligatory development of the distance school year due to the incidence of the coronavirus.

The documents posted on its web portal and publicly accessible indicate that the awards of the companies that were disqualified in the tender publicly called by the Minerd on November 16, 2020, for the process of Urgency Exception for the Acquisition of Technological Devices must be re-evaluated.

“The governing body of public procurement ruled through resolutions 128, 129, 131 and 135 that the Minerd must weigh the economic offers of the companies that were disqualified, issuing a new evaluation report and that, if there are variations in the lots initially awarded, they must be re-awarded and ratify those others where there was no variation,” the document cites.

Fulcar emphasized that the awarding process was carried out in the Directorate of Ethics and Government Integrity, the Civil Society Oversight Board, and international organizations to guarantee the educational methods.

Meanwhile, Minerd considers that the DGCP went beyond its competence by ordering in four resolutions the annulment and review of more than half of the lots, according to the requests for precautionary measure filed last week before the Superior Administrative Court (TSA) to suspend the execution of the decisions of Public Procurement.

Fulcar confirmed that some of the difficulties imposed by the incidence of the coronavirus pandemic were overcome.

“Many people bet – without us knowing the reason – on the impossibility of developing the 2020-2021 school year,” said the Minister of Education during his speech at the official closing ceremony of the school year.

management
Obstacles.
Fulcar pointed out that the lack of a strategic plan for the 2020-2021 school year, the debts of more than 17,000 million pesos, a lack of 19,000 teachers, the deterioration of 87% of the physical plants of the educational centers, the vast digital divide, the low level of institutionality and the existence of an outdated educational model stand out among the main obstacles that his management faced.

Confidence.
Finally, he thanked President Abinader for trusting him and his team in front of the Dominican public education entity.