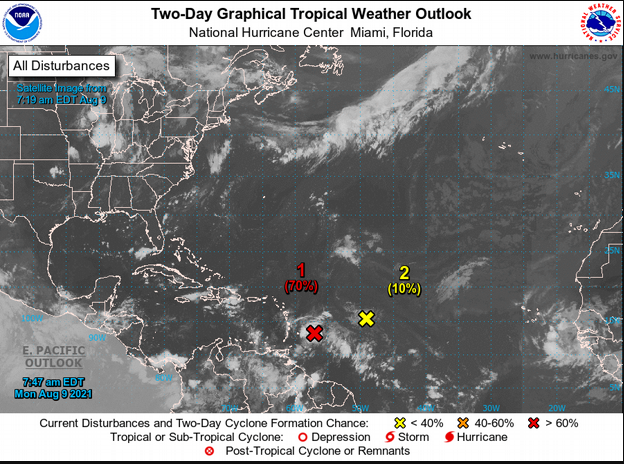 Could arrive in the Dominican Republic Wednesday

The National Hurricane Center (NHC) of the United States reported that the conditions are in place for the formation in the coming hours of a tropical depression in the Caribbean and warned the Lesser Antilles, the Virgin Islands, Puerto Rico to prepare for such an eventuality.

According to a bulletin issued at 08:00 (12:00 GMT), the low-pressure system combined with downpours and thunderstorms was located about 150 miles (241 km) east of Barbados this morning, will undergo “further development.”

A tropical depression is possible to form on Monday, as the low pressure moves west-northwest 10 to 15 miles per hour (16 to 24.1 km/h).

The odds of it becoming a named storm later are 70%, according to the NHC.

Forecasts indicate the system will reach portions of the Lesser Antilles tonight, then move near the Virgin Islands and Puerto Rico on Tuesday and be close to Hispaniola (the Dominican Republic and Haiti) by mid-week.

According to the NHC, heavy rains and flooding are likely in the Leeward Islands, Virgin Islands, and Puerto Rico.

Regarding the other system in the Atlantic that the NHC was observing last weekend, the same bulletin indicates that it is less and less likely to develop over the next few days as it moves west or west-southwest at about 10 miles per hour (16 km/h).

The U.S. National Oceanic and Atmospheric Administration (NOAA) released in recent days its updated forecast for the current season, according to which above-average activity will be recorded in the Atlantic.

The update made by the NOAA Climate Prediction Center reflects that this year between 15 and 21 named storms can be recorded, of which between 7 and 10 could reach the category of hurricane, and the 3 to 5 may be larger, this is category 3, 4 or 5 on the Saffir-Simpson scale.

Near the equator of the current Atlantic hurricane season, which officially began on June 1, the count to date is five tropical storms: Ana, Bill, Claudette, Danny, and Elsa, the last of which became the first hurricane this year in early July.