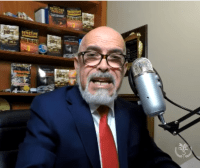 The arrest warrant was issued by National District 2nd Criminal Chamber alternate judge, Raymundo Mejía, who is in charge of a lawsuit filed against the investigator, by deputy Sergio Moya (Goris), of the Modern Revolutionary Party (PRM), who is allegedly linked to drug trafficking.

The judge declared Martínez in contempt and is barred from leaving the country.

In a separate case, the Miami-based investigator was accused of slander by veteran politico Guido Gomez Mazara, wo says he notified Interpol.