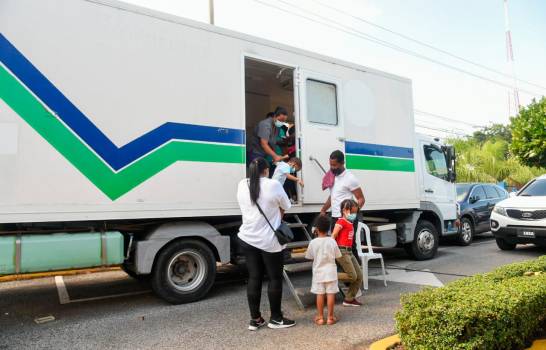 They will review the evidence with medical societies, as vaccination in children is a sensitive issue. (MASSIEL BECO / FREE DIARY)

The minister stressed that children are the ones who have tested the least for the virus so far.

The Minister of Public Health, Daniel Rivera, informed this Wednesday that following Monday he would hold a meeting with the medical societies and the Dominican Medical Association to reach a consensus on the vaccination of children between five and eleven years of age.

“In order to seek a consensus to agree on whether we are going to use the vaccine in the children over five years of age or not,” said the minister.

Rivera indicated that they would review all the evidence with the medical societies since vaccination in children is a delicate issue.

The minister emphasized that so far, children are the ones who have tested positive for the virus the least.

Meanwhile, the head of the General Directorate of Epidemiology, Ronald Skewes, explained that three cases had been reported in two private schools; one corresponds to an elderly teacher with comorbidities and the other to a child under seven an adolescent of 17 years old.

“If you look at the number of children who are getting sick, only three, in relation to the two million who go to school, the proportion is very low,” he said.

Ronald pointed out that it is essential to follow up on these cases and asked the schools to notify them to act promptly.

On the other hand, the minister informed that they are working on designing the vaccination passport together with the Migration Department.

It doesn’t matter if children catch the common cold, also known as Covid-19. They do not need a vaccine that can cause more harm than good (in their age group). Any attempt to vaccinate children of that age should be met with dangerous consequences for those pushing the vaccine on them. It should be considered CHILD ABUSE, and the proper actions taken against the abusers. And dare to challenge me on calling Covid the Common Cold, because the AMA ENCYCLOPEDIA designates all Covid viruses as such, and has for 50-years!