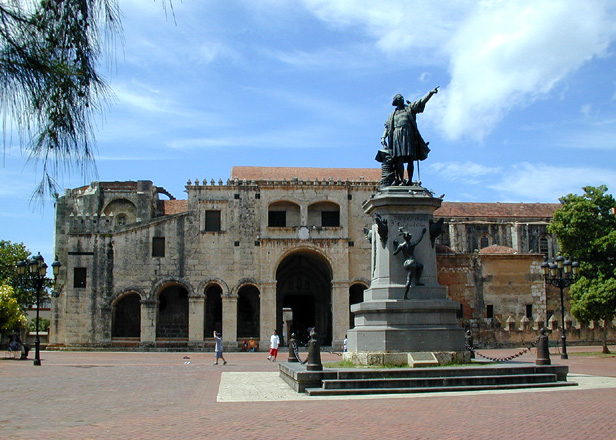 Santo Domingo.- Anthropologist Fátima Portorreal clarified that the call made for this October 12 in front of the statue of Christopher Columbus “is not to knock it down.”

Portorreal on October 12 said they will stand in front of the statue, located in the Colonial Zone, to demonstrate against it and demand that it be removed.

The anthropologist said they request the removal of the statue and take it to the Museum of History where a “colonization room” is created, in which the one of Nicolás de Ovando is also placed.

“It is not possible that we continue to handle the images and representations of the colony. You don’t have to demolish them, but send them to a museum to talk about the process that led to the construction of this image and the colonial representation that it has within Latin American countries

Just another fucked up person trying to change history. What is wrong with this lunatic. If she doesn’t wants to see the statue there just don’t look at it when you walk by it. Does she also wants to demolish the Cathedral which was also made during those years. I say to you. Screw you.

I think that a statue glorifies the person, and glorifying a genocidal figure no matter the time those crimes were comitted I believe isn’t a good message for the society at large, it isn’t about changing history or hiding the past but about recognzing it and not glorifying the makers of such atrocities.

I think these people are right standing up for this statue no matter what country you are from (ITS HISTORY). ALSO, I think it’s terrible that they are taking America’s history away taking down our statues & changing things in America.. No matter if it’s good or bad it’s history in the country you live in & you learn from it weather it’s good or bad.. What is happening to America, it’s not America anymore when this type of thing is happening. And that goes for any other country this is happening in. Stand up for your country 🌠

Yes, we should embrace European supremacy because that’s what their Christian God said was right to do. Do evil in the world and I will forgive your sins! Hypocrites!!!
America is based on pure greed, treat the natives who live in harmony with nature as if something else to exterminate, make a dollar off of anything and everything you can

It’s all lies he didn’t discover anything but people was already there.

These people are sick. Columbus is the reason the island is what it is today, and these idiots want him removed. NO BUENO!

Why does this site choose to censor comments when it has to do with the horrible president?

There’s a lot of jealous crackpots out there

He o ly discovered that people was already there.

Crush it put it in pot holes on the road.

Taking down a statue is wrong. Why puy it up in the first place? At one time people obviously believed the statue meant something so leave it alone and instead of trying to change everyone’s concept on what you beleive the statue stands for and tearing it down because you dont like it maybe try to accept that others don’t feel that way and the world isnt about only you. So many people want to destroy history because they feel offended…..offended by act or events that happend hundreds of years ago and have absolutely no affect on their life today only because they want attention…theu want to be reglcognized as someone who changed something….well your not changing anything. I’m Native American and I’m very angered that the General Lee staue was removed….what people don’t understand is that those times were not like they are now and everybody beielieved in different ways back then and general Lee was not a symbol of slavery, general Lee was symbol of one of the greatest leaders, a war heroe, and a man who gave courage and hope to hundreds of thousands of people during his time and after the war he became a university professor and was just an icon of American history…..those people who argued to tale it down….their lives are no different today than they were then and all they wanted was someone to recognize them, feel sorry for them for something that they never had to take part of. They were never slaves their just despicable crybabies.

This suggestion of removing Colombus gracious, old and symbolic statue is as crazy as the others one implying that Cristopher Colombus wasn’t a personality of great importance in America History. Same as others comments detracting Colombus, as Discoverer of las Americas, I’m of those that believe that he “discovered” our Continent…unknown -untill that moment- to the Europeans. We can go and go on and on doing multiple analogies on the meaning of “discovering America”, but using simple samples ratify that concept, let’s see:
When you discover anything new -like a place, like earth own roundness, like cures for our bodies, like new technologies or simpler “things” like gold mines, like unknown places to your culture…are those “DISCOVERIES”…or Not?
We all agree that they were precolumbian natives in las Americas, but they, their lives and theirs Culture were unknown to those living in Europe or Asia…as we revised the concepts, like discovering, battles, religion and many others….we are going to find out that they are many sides and interpretations to those activities as part of our human history
I think that those trying to ignore -and erase- our past and it’s importance centralized on it’s circumstances are deadly wrong…as wrong as it’s denying our ancestry cultures, origins and doings…
Where those doings bad?
Where those doings wrong?
We need to judge it by it’s historic moments, it’s culture and it’s very own circumstances!