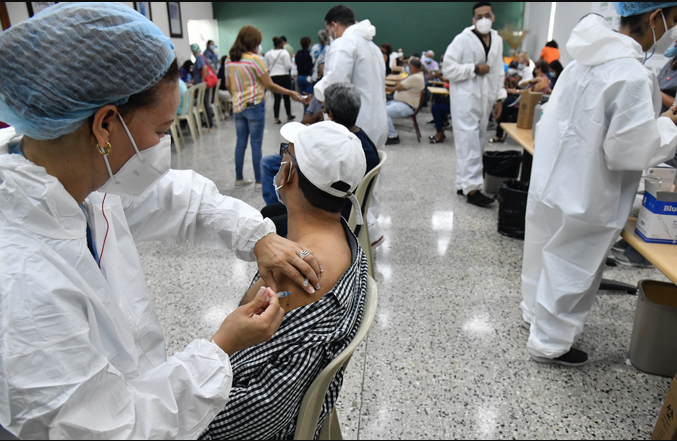 The government's goal with the National Vaccination Plan started last February was to cover more than seven million people with two doses of anticovid.

San Cristóbal and Monsignor Nouel do not reach 50%

Only the provinces of San Cristóbal and Monseñor Nouel remain without reaching 50% of their population over 18 years of age with two doses of the vaccine against the Covid-19 virus. In comparison, the number of districts that have surpassed the goal of 70% with a complete scheme remains at three.

Meanwhile, 58.3% of the target population of 7.5 million people over 18 years of age have completed their two doses. In comparison, 69.7% have applied the first dose, in which 11 districts exceed 70% of the population reached, according to the latest update released by the VacunateRD program, up to the 10th.

Having two doses of the vaccine against Covid-19 or presenting a PCR test is among the new requirements that will be enforced in the country as of next Wednesday to enter collective places.

According to the preliminary report, up to the beginning of this week, eight provinces were above 60% of their population with two doses.

Positivity close to 15%.
About 15 positive cases for every 100 laboratory samples processed were detected in the country in the last 24 hours, with 520 new positive cases diagnosed in a total of 5,884 samples analyzed.

The report puts daily positivity at 15.73% and 9.48% positivity in the last four weeks, as well as an increase in hospitalizations of patients with the disease, reaching 23% of regular beds, with 606 patients admitted; 34% of Intensive Care Units (ICU) with 207 people in critical conditions and 26% of ventilators, with 134 patients under assisted ventilation.

Five new deaths
The system also reported the notification of five new deaths, two of which occurred in the last 24 hours, for a total of 4,072 deaths due to Covid-19 disease in the country, showing a lethality rate of 1.11 percent and a mortality per million inhabitants of 389.72.

Of the new positive cases of the virus detected yesterday, 123 were seen in Santo Domingo province, 114 in the National District, 104 in Puerto Plata, and 38 in La Altagracia. Thus, the total number of active cases yesterday was 7,616.

The country reported a total of 366,711 registered cases of the virus.

Identifies variants
Likewise, in a press release issued yesterday, Referencia Laboratorio Clínico informed that it has the test to identify in patients the new “Alpha,” “Beta,” “Gamma,” “Delta” and “Mu” variants of SARS-CoV-2, through three methodologies for the detection and typing from samples of viral RNA obtained from a nasopharyngeal swab.

Its director of molecular genetics, Eileen Riego, explained that the variations result in transformed proteins with the capacity to increase virus transmission rates and a greater risk of person-to-person reinfection, which is why their early detection is of great importance.

She recalled that the World Health Organization (WHO) described five key high-impact variants or Variants of Concern (VOC), which are Alpha, identified in the United Kingdom; Beta, in South Africa; Gamma, in Brazil; Delta, in India and more recently Mu, identified in Colombia.

The WHO also declared that vaccines alone would not end the pandemic, so continued health protocols: use of masks, hand washing, and social distancing measures are all still very important.