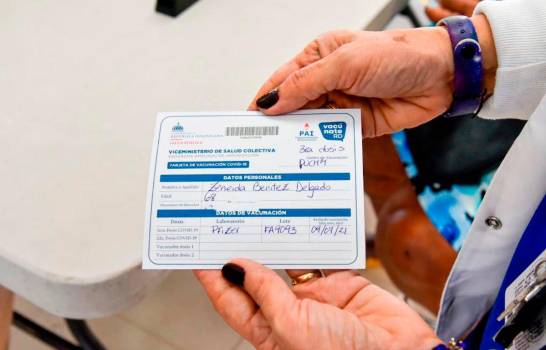 Banks will require from this coming Monday, October 18, the presentation of a vaccination card at the entrance of branches and bank offices. (FREE DIARY / MASSIEL BECO)

Banks will have new hours.

In compliance with Circular 016-21 of the Superintendency of Banks, the Asociación de Bancos Múltiples de la República Dominicana (ABA) announced that its associates will require, as of this coming Monday, October 18, the presentation of a vaccination card at the entrance of bank branches and offices.

Through a press release, it explains that visitors must present their identity card and vaccination card, containing at least two doses of the COVID-19 vaccine, except for those vaccines that require only one dose, explained the ABA in a press release.

It clarified that both documents could be presented in original, legible physical copy or digital photograph. Also, the results of a PCR test in original, with negative detection, with a maximum of seven (7) days of being performed by a laboratory authorized by the Ministry of Public Health or a special permit issued by the said organism, can be shown.

The union specified that, according to the resolution, in a transitory manner, the entry to the establishments will be allowed to those persons vaccinated with only one dose and who are within the term to receive the second dose, as announced by the Minister of Public Health.

In addition, he reminded that the use of masks, the respect of physical distancing, disinfection of spaces, and the occupation of up to 75% of the establishment’s capacity, among other measures to avoid the contagion of coronavirus, are still mandatory.

The ABA encouraged users to use the modern digital channels, ATMs, and bank subagents enabled by the financial intermediation entities to carry out their transactions quickly and efficiently.

Due to the cessation of the state of emergency ordered by the Executive Power, multiple banks will de-escalate the schedules maintained during the pandemic, informed the Asociación de Bancos Múltiples de la República Dominicana (ABA).

Regarding the closing of operations, the ABA indicated that bank branches would close between 4:00 p.m. and 6:00 p.m., Monday through Friday, while on Saturdays, they will close between 1:00 p.m. and 2:00 p.m. In the case of offices in commercial plazas, the closing hours will be 6:00 p.m., Monday through Friday; and on Saturdays, they will be open to the public until 2:00 p.m., he pointed out.

The ABA indicated that, as of December, opening hours would be set between 8:00 a.m. and 9:00 a.m., except for shopping malls, which will open at 10:00 a.m. Meanwhile, he explained that the closing time would be 7:00 p.m. at the latest, from Monday to Friday; and on Saturdays, the service will be extended to 4:00 p.m. at the latest.

With less than 50% having a double vaccination, this should be fun to watch!

If possible use drive through service at the bank…

He keeps destroying our country. Kick him to the curb with China.

I want to retire to DR and open a bank account there, but I will not get the experimental vaccine. What are my options?

To open an account you need to physically go inside a bank…just go and take the pcr test and if negative then go and open your account…after that you can use the bank drive thru window to do your banking…for food shopping it can be done online, for pharmacy you can also use drive thru window…there are ways to try and live as normal as possible without taking the experimental vaccine…enjoy your retirement…

Thank you for info. Still a few years away. Hoping to open the account next year.

Hopefully by that time this lunacy will end…fingers crossed…

I think banks don’t need more clients. I will withdraw all mi accounts on monday. Probably we can live without banks. Crisis is coming. The bankers are accelereting. Welcome to the new world